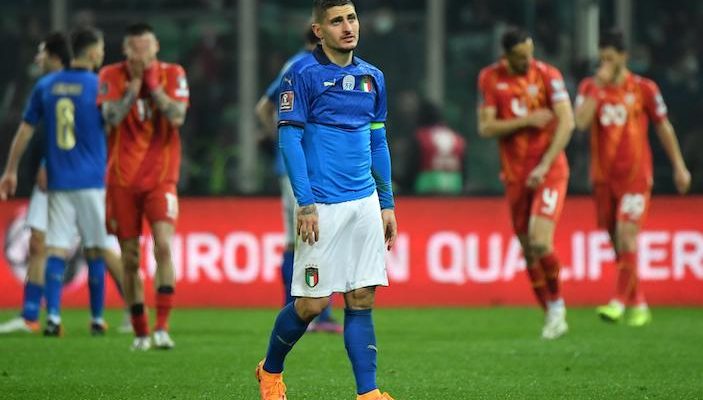 Italian fans will have even more regrets by watching Portugal-Switzerland at the World Cup tonight, two of the teams the Azzurri could have eliminated in the qualification phase.

Roberto Mancini’s Italy failed to qualify for Qatar 2022 after finishing runners-up to Switzerland in their World Cup qualification group.

They were then knocked out by North Macedonia in the play-offs semi-finals with a 1-0 loss at the Stadio Renzo Barbera in Palermo in March.

Italy collected two stalemates against Switzerland during the group phase: a 0-0 draw in Basel on September 5, 2021, was followed by a 1-1 draw at Rome’s Stadio Olimpico in November.

Italy’s regrets were amplified by Jorginho, who missed a penalty in both games against the Swiss.

The Azzurri finished two points behind Switzerland in Grop C and had to go through the play-offs where they were drawn with North Macedonia. They had been put into the same group as Portugal and Turkey, who met in the other semi-final.

However, the much-anticipated meeting between Leonardo Bonucci, Giorgio Chiellini and their former Juventus teammate Cristiano Ronaldo never took place because the Azzurri were eliminated by North Macedonia, failing to meet the Portuguese who had beaten Turkey 3-1.

Tonight’s World Cup meeting at Lusail Stadium could have been played a few months ago, had Italy managed to win their qualification group.

Roberto Mancini had stressed that the Azzurri deserved to be in Qatar, but the sad reality is that his men are watching tonight’s match with even more regrets, like all their supporters.