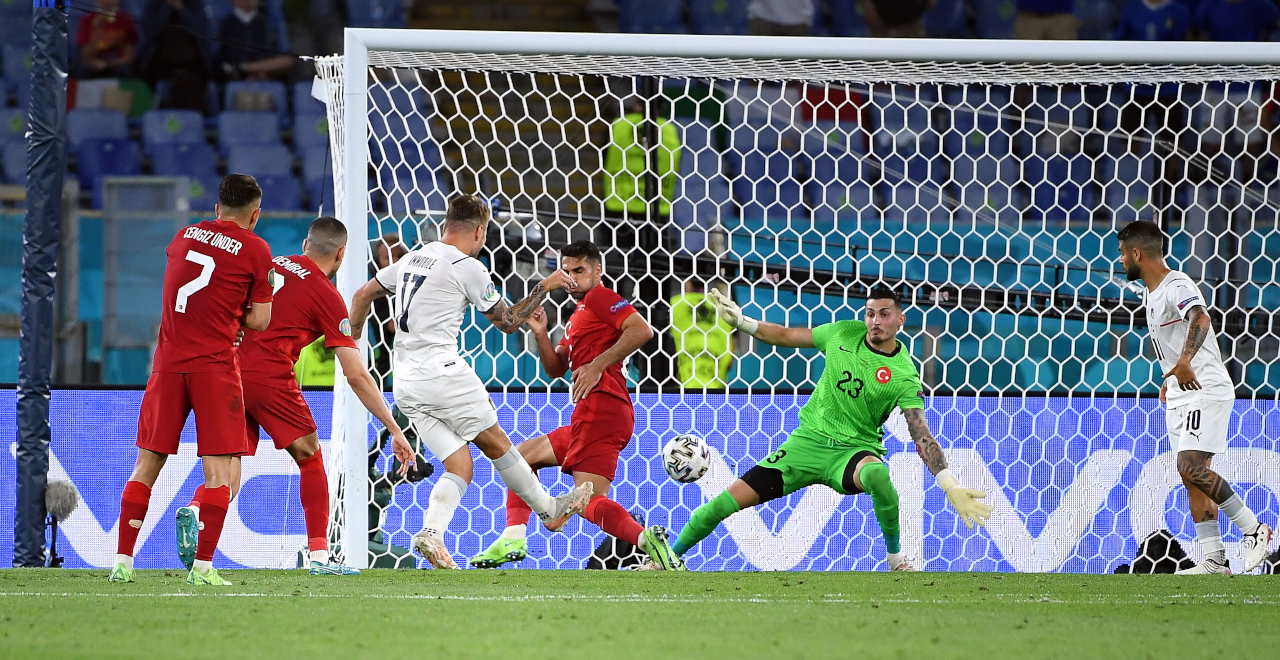 Italy could not have asked for a stronger start to Euro 2020, dominating Turkey for a 3-0 victory with a Merih Demiral own goal, Ciro Immobile and Lorenzo Insigne.

This was not just the opening game for the Azzurri, but also for Euro 2020, preceded by an opening ceremony that included Nessun Dorma sung by Andrea Bocelli. The Stadio Olimpico had 16,000 fans for the first time since March 2020.

Marco Verratti was out with a knee problem, after Stefano Sensi and Lorenzo Pellegrini pulled out of the competition with muscular issues.

Lorenzo Insigne curled wide, then Ciro Immobile had his shot charged down by a hand, but it was in a natural position.

The biggest chance so far came on a corner, Giorgio Chiellini allowed a free header that was fingertipped over the bar by Ugurcan Cakir.

Immobile aimed a header just wide of the back post, with Immobile and Leonardo Bonucci attempts, then the Lazio striker’s shot was straight at the goalkeeper.

Just before half-time, there was another much stronger penalty appeal for a Leonardo Spinazzola cross charged down, but under the more relaxed rules introduced two weeks ago, it was not considered worthy of a VAR on-field check.

There was a scare on 51 minutes, as Jorginho was caught napping by substitute Cengiz Under, who sprinted towards goal by himself, but Roma teammate Spinazzola kept up the pace and managed to get the block so Gianluigi Donnarumma could save.

Moments later, Italy broke the deadlock as Barella sent Berardi down the right, he tried to square it across the six-yard box for Immobile, but Juventus defender Merih Demiral got in the way and accidentally bundled it over the line.

This opened up the game and suddenly Spinazzola and Manuel Locatelli stung Cakir’s gloves. Berardi was involved in the second goal too, his cross finding Spinazzola, whose chest and strike forced a save, but Immobile turned in the rebound from six yards with the inside of his boot.

On the third goal, Berardi intercepted a poor goalkeeper’s clearance, sparking a wonderful left to right passing move in the rugby style involving Barella, Immobile and eventually Insigne for his trademark right-foot curler. Incredibly, this was the first time in European Championship history that Italy scored three goals.

Italy also retained their ninth consecutive clean sheet because Chiellini flung himself in the path of Burak Yilmaz for a decisive block from six yards in stoppages.