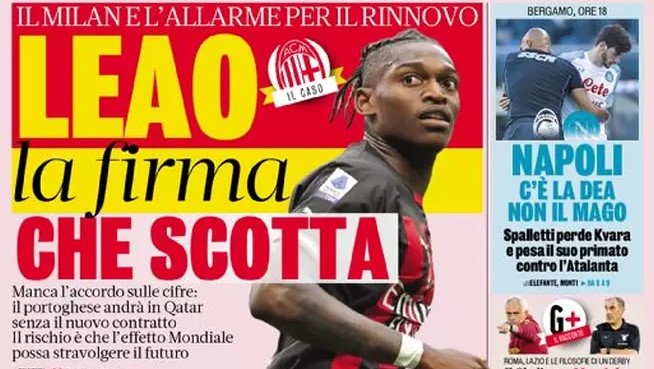 The former Juventino: I still believe in Allegri, lot of quality, he can get back

The former Interista: We are favourite, Lautaro punishes in the shadow. Dimarco improves

Milan and the warning for renewal

No economic agreement. The Portuguese star will go to Qatar without a new contract and the World Cup effect can shake his future

It is never the same devil: Pioli relaunches Origi up front, a Maldini rival after 55 years

The challenge on San Siro, Sgarbi: ‘It must not be demolished.’ Berlusconi backs him

Napoli, there’s the Dea, not the magician

Spalletti loses Kvara and weighs his leadership against Atalanta

Mourinho the gladiator, Sarri the professor: between charisma and obsession

Key Saturday for Spalletti, if he wins, he sends Atalanta at -8

Osi is there, anyway

Napoli, Kvara stop: the Nigerian leads the assault in Bergamo

Milan against Spezia to cancel the nightmare Serra

Luciano warms up Raspadori and charges: ‘Anfield certified our strength.’ Pioli faces the team that won at San Siro with an incredible error from the referee

Thrilling Juve-Inter: what a chance for Allegri

Interview with the former Ferrari ace, a super Bianconeri fan: ‘We must repeat the performance against PSG and we’ll win- Nice future with Miretti and Fagioli. Chiesa like a furious dog freed after months caged. I trust Agnelli.’

The coach’s work has attracted the interest of Nottingham (and not only). Ivan’s future is uncertain

Kiwior, Milan is looking at you

Sottil no longer wins: draw between Udinese and Lecce