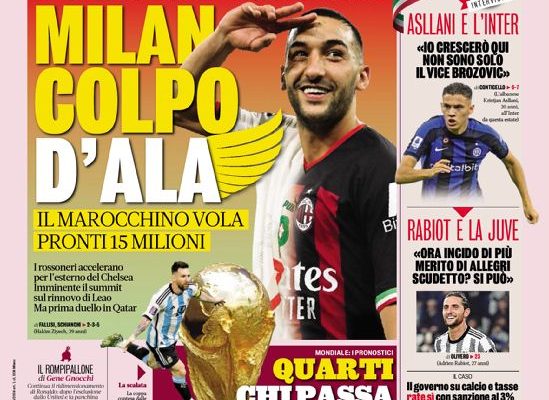 Here’s the offer: Ziyech straight away

There’s €15m for the Moroccan

Rossoneri accelerate for the Chelsea winger

Imminent summit for Leao renewal, but first a duel in Qatar

Neymar, Messi and Mbappé favourites, but not that much

And that CR7 on the bench…

‘I will grow here, I am not just the Brozovic understudy’

‘I make more of an impact now, it’s thanks to Allegri. Scudetto? We can do it’

Government on football and taxes, instalments possible with 3% sanction

‘Brazil is a little bit mine’

‘It is a complete squad. I am tied to Militao, Rodrygo and Vini, but also Richarlison and Casemiro. This is not Ronaldo’s last dance’

CR7 out, Georgina on the attack

Rabiot fired up from Qatar: ‘With Chiesa and Pogba we can do anything’

Frenchman ignores problems at the club and applauds Allegri for the turnaround: ‘He changed me with videos’

Napoli back to business with super Raspa

Two goals, hits the post and also an assist in the Turkey test

Politano on target too

Spalletti: ‘Kvara is in good shape’

Besieged on multiple fronts, the Bianconeri look to a ‘technical government’ (from Ferrero to Scanavino) and youths, but are ambitious on the market. Cherubini towards the exit, the idea is a DS similar to Giuntoli. The future of Allegri will be discussed in June. Iling promoted to senior team. NextGen reach Coppa Italia’s semis and Women lose to Arsenal.

Muscle lesion for the midfielder who will remain out for a month and will get treatment in the retreat in Spain.

From Ounahi to Weah: the World Cup auction begins