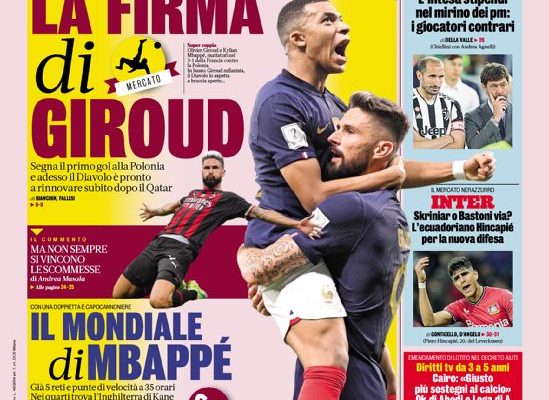 It is Mbappé’s World Cup

Against South Korea and Son

Wenger: ‘The winning teams have wingers and attacking defenders’

Wages agreement targeted by prosecutor: players were against it

Skriniar or Bastoni out? Ecuadorian Hincapié for the new defence

TV rights from 3 to 5 years

OK from Abodi and Lega Serie A

Lotito amendment in the decree to provide help

Mbappé takes down Poland (3-1) with two goals and an assist: now England in the quarter-finals

He is the heir to Messi and CR7

On Saturday a place in the semi-final is at stake

Brazil, Neymar has done it

Rapid recovery for the striker who will play against Korea

Croatia have a thriller against Japan, the revelation of the tournament

Elkann has many doubts on Juve

The club belongs to the family, but accounts, trials and media clamour are not helping the image of an international holding company

Season overshadowed by sporting justice verdict: there could be enormous controversy if the Bianconeri were to be docked points in April or May

‘Media trial does damage that nobody pays for’

Super brace against Poland and assist for the Milan striker, who surpasses Henry: France at his feet

There is England for France next, even Kane has turned up!

Finally Conte’s champion breaks his duck, Senegal dream finishes in the Round of 16

On Friday the first quarter-final with the Argentina threat

Another two ties today: Tite has his ace back

EuroJapan, the ex-Inter bad guy for you

Bearzot legend in Cuba with Diego

A pitch named after ‘our’ coach for Maradona’s charity