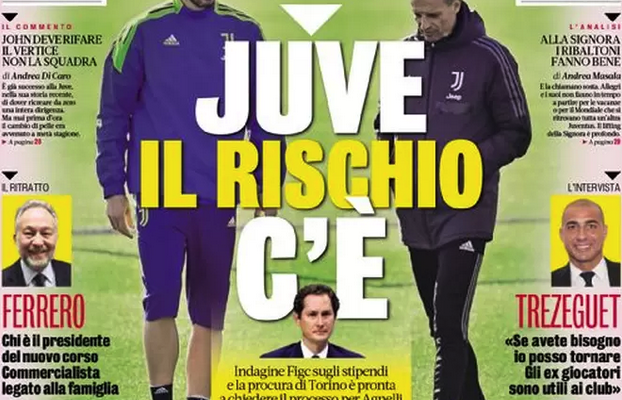 Juventus, the risk is there

FIGC investigation on salaries and the Turin Public Prosecutor’s Office is ready to ask for Agnelli’s trial. Allegri wanted to resign but Elkann confirmed him.

Who is the president of the new course, Family Accountant.

Trezeguet: ‘If you need me I can come back, former players are useful for clubs’

Leo against Poland and challenging Ronaldo.

Frappart beyond the walls, the female referee conquers the world.

The club turns over a new leaf after Agnelli’s and the entire board of directors’ resignations.

Elkann appoints Ferrero as president: ‘We will win again’

John thanks cousin and confirms Allegri: ‘We count on him a lot’

The roar of Rashford

English overwhelming, in the Round of 16 they take on Koulibaly.

USA battle with Iran: Pulisic decides. Today Poland-Argentina, Messi in or out.

Kessie, surprise move, he offered himself to Inter

Elkann: ‘The future will be extraordinary’

Elkann does not want to downgrade the club’s ambitions and is ready to support it financially as well.

The coach is confirmed by the owners and restarts: ‘Now all to work for results’

Discovering the new president with two colleagues and friends: ‘Rigorous and competent, he will do very well’

Koulibaly, hero’s heart: ‘It’s for the people of Ischia’

Pulisic eliminates Iran, in the Round of 16 USA-Netherlands

Kessie proposes himself, no Milan, no Inter

‘Leao decides who he wants to be’ – Ambrosini interview

We’re free, who will offer the most?