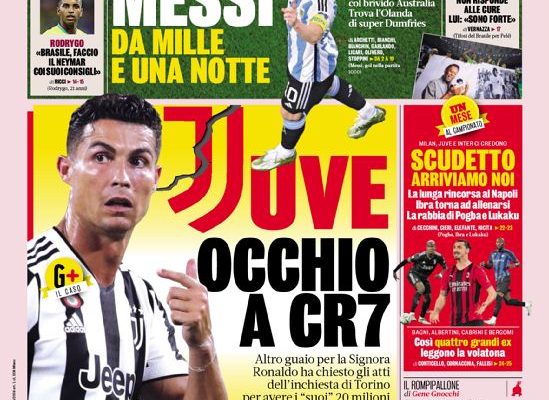 Juve, watch out for CR7

More problems for the Old Lady

‘Chiesa and Kulusevski overpaid, he drugged the transfer market’

Messi for a thousand and one nights

Leo leader with goal and magic: Argentina into the quarter-finals with late Australia scare

They face the Netherlands and super Dumfries

Rodrygo: ‘Brazil, I’ll be your Neymar with his advice’

He insists: ‘I am strong’

The long chase after Napoli for Milan, Juve and Inter

Ibra back to training

Pogba and Lukaku fired up

Here is how four great exes read the sprint

A billion for Juve

From rumours over possible sale to valuation

High finance is active around the club, including industrial alliances

If they weren’t floated on the stock exchange, most of the problems wouldn’t be an issue

The controversy of daily diffusion of wiretaps

Argentina thank Messi again: on Friday the Dutch in the quarter-finals

Australia beaten 2-1: the captain opens, then Alvarez on target

Mbappé, there’s the challenge with Szczesny

He seeks more goals against Poland: wants to become heir to Benzema

Juve: Away from Turin

Trial on balance sheets: move from the Bianconeri lawyers

Club is convinced it must be judged in Milan, which is where the stock exchange is based

Rome is an alternative

Request to move the trial advanced even before the trial is announced: response by December 18

Round table organised by Tuttosport

Messi and that’s it!

Leo, at his thousandth game, is the only light for Argentina: left foot for 1-0 and magic moves that weren’t developed

After Alvarez doubles their lead, Australia close to a shock equaliser: 2-1 final result

On Friday there’s the Netherlands in the quarters

Szczesny, are you ready?

Rodriguez, what a sprint: ‘I owe it to Juric’