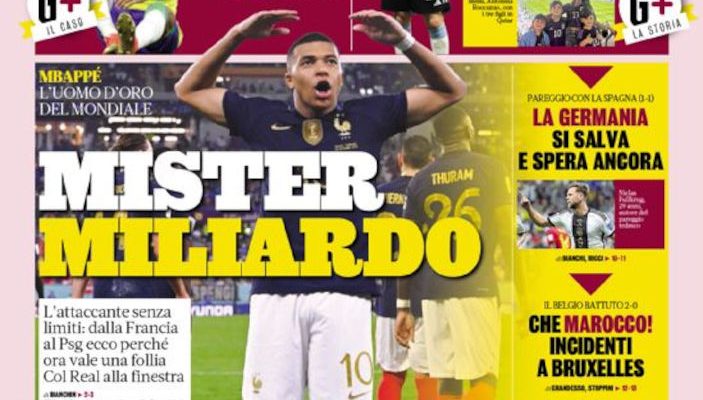 Mbappé the golden man of the World Cup

Striker without limits: from France to PSG, here is why he must be worth a crazy amount now

With Real Madrid at the window

Germany save themselves again

What a Morocco! Clashes in Brussels

Brazil accuse: ‘No more rodeos. Stars have to be protected’

Neymar and too many fouls

Messi, the last dream of a family affair

The clan that pushes the Argentine

Names for Milan, Juve and Inter to fight back in the Scudetto race

Transfer window opens in just over a month

Hanging by a thread

Füllkrug saves Germany, Lukaku returns and falls: Round of 16 in the balance

Romelu, the clash with ex-Inter man Perisic will be decisive on Thursday

Brazil and Portugal hunt for victories and qualification

Coach Tite takes on Switzerland without Neymar and Danilo

For Ronaldo there’s the Uruguay obstacle

Martinelli the Italian chooses the Selecao

He has a double passport

Results and sustainability via the Next Gen, integrating the transfer market and able to concentrate the resources on champions

Fagioli and Miretti are examples

Agnelli: ‘The second team reduces the costs of the first’

Yesterday 29,000 at the Stadium for the game against Mantova

Spain in love with Morata, but Germany find their hitman

Alvaro comes on and scores (again), Füllkrug gets the Germans out of trouble

De Ketelaere? No, the ace is Sabiri

Tonight hunt for the Round of 16 without Neymar and Danilo

Juventus man discovers himself a leader of the Selecao, but Rodriguez encourages Switzerland

Serbia for the turning point

Vlahovic, are you there?

Fenerbahce open to letting the Uruguayan leave on a temporary basis

Blessin at the end of the line, three options for Genoa

One Comment on “Today’s Papers – Hanging by a thread, Juve show the way”