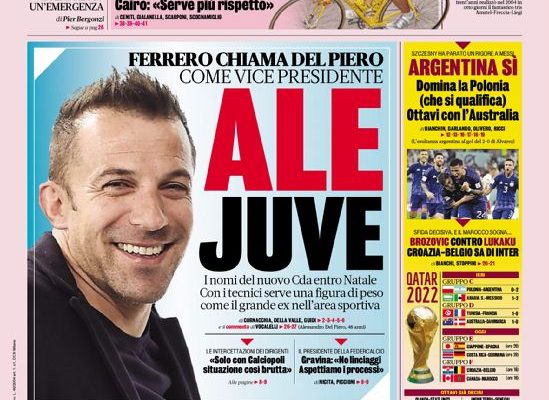 The names of the new Board of Directors by Christmas

With the technical figures, they need someone like the great ex on a sporting level

‘The situation is as bad as Calciopoli’

Gravina: ‘No to public lynching, let’s wait for the trials’

Round of 16 against Australia

Decisive clash and Morocco can dream

Leo misses a penalty, but Argentina take off with Mac Allister and Alvarez (2-0)

Szczesny kids Poland by bewitching La Pulga from the spot, then the Seleccion youngsters take centre stage: Fernandez shines too

There’s Australia in the Round of 16

Germany, the day of fear

Flick’s future depends on how Spain get along with Japan

Lukaku in doubt, Brozovic on the attack

Morocco battle for their pass with Canada

Juve won’t stand for it

Strong response from the club to federal prosecutor

With a statement they underline how ‘in the absence of alterations to the accounts, any sporting sanction would be unfounded’

Strong statement from the club: ‘No alteration, so sporting sanctions would be unfounded’

Gravina, FIGC chief: ‘No to lynching. Tebas? He should look at his own house’

Toro priority is to convince the coach to sign the renewal in December, Vagnati already back from Qatar

Argentina go through, but Szczesny is the hero

Poland will face France in the Round of 16