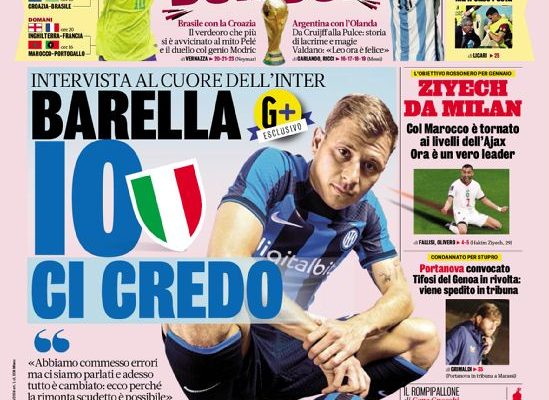 Interview with the heart of Inter

‘We made mistakes, but we talked and now everything has changed. Here is why the Scudetto comeback is possible’

With Morocco he returned to the levels he had at Ajax

Now he is a real leader

January objective for the Rossoneri

Portanova called up, Genoa fans revolt: he is sent to the stands

After conviction for rape

Neymar and Messi open the quarters: if they win, they face off

Argentina with the Netherlands

From Cruijff to the Pulga: story of tears and magic

CR7 furious: he’s leaving, no he’s not, but the controversy remains

Juve, only Allegri is locked in: talk of Del Piero and a big name director of sport

For now the UEFA investigation isn’t a worry: Ceferin already got what he wanted, Andrea’s head

The superstars face off with eyes on the semi-finals: today Neymar and Messi, then CR7 and Mbappé

Napoli of a thousand colours

All the solutions open to Spalletti

For Mou his confirmation is a priority

Englishman asks for a two-year contract

Frosinone fly in Serie B: Bari, Benevento and Pisa back to winning ways

Juve investigation, here are the facts!

Everything there is to know, avoiding superficiality and sensationalism

The metamorphosis of Moise, super as training resumes

Toro, there is the new Bremer

Robert Renan in their sights, centre-back of the Brazil Under-20 squad: challenging Atalanta and Benfica

Another move to convince Juric to renew: Moschella to join the coaching staff, one of Ivan’s faithful followers in defence

‘Go Messi! This is how to beat Van Gaal’

‘It is the World Cup of Gvardiol and Mbappé’