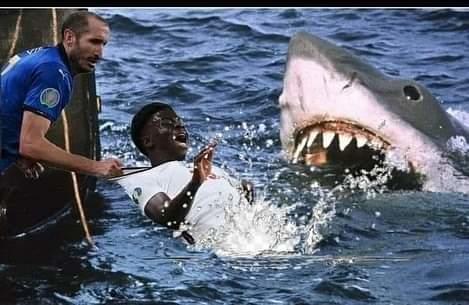 On an unforgettable night for Italy, Oli Coates takes a look at another memorable moment from the UEFA Euro 2020 Final.

It’s the last of six minutes of added time at the end of the EURO 2020 final. Nothing can separate Italy and England, with the scores locked at 1-1 and extra time looming large. The Three Lions have barely had a sniff in the second half, as the Italian defence stands tall and strong.

Veteran Giorgio Chiellini has put in a lionhearted performance alongside Leonardo Bonucci in central defence. Neither man has put a foot wrong in nearly 96 minutes. But with the clock ticking down, Chiellini finds himself out of position, with England’s Bukayo Saka finally presented with an opportunity to make an impression on the game.

Saka has the whole Italian half to run into from out wide, but the Azzurri No 3 has different ideas. Pulling the English forward back quite literally by the scruff of the neck, Chiellini commits a tactical foul which is punished with the yellow card it deserves. Italy make it to extra time, eventually winning on penalties to claim their second European Championship.

Chiellini, Saka and the English petition: too much mess for a tactical foul

Case closed, you may think. Think again. For in the modern age of mass hysteria, there’s an English uproar surrounding Chiellini’s uncompromising foul. One supporter even took it upon themselves to create a petition demanding the final be replayed. If they and the 125,000-plus people who signed the petition weren’t being at least semi-serious, that would almost be as funny as the inevitable glut of memes the incident has spawned.

For in the age of social media, it’s impossible for such a moment to escape the army of photo-shoppers, caption-writers and would-be comedians so intent on making mountains out of molehills or bringing a little levity to the seriousness of sport, whichever way you look at it. Whatever your thoughts on the foul itself, we defy you to not laugh at some of the best Chiellini-Saka memes.

bro these saka memes are to funny😭😭😭 pic.twitter.com/f4mqiR9G9k

I cannot stop laughing at all of the chiellini/saka memes from that play that resulted in a yellow… below is one of the better ones .. #ita @azzurri pic.twitter.com/h4sW6muXk4 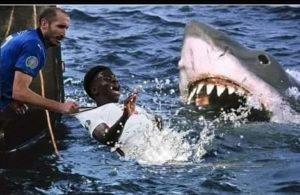