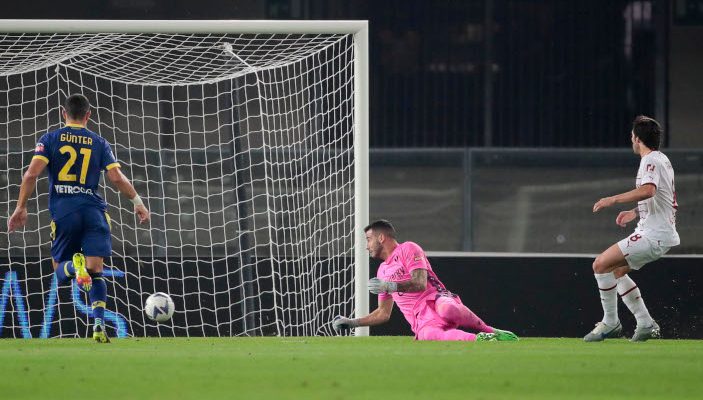 Sandro Tonali confirmed his Stadio Bentegodi fondness by snatching a late victory away to Verona, who made their debut under new coach Salvatore Bocchetti, and sends Milan clear in third place.

Verona gifted the opening goal, as Ajdin Hrustic’s terrible back-pass was straight at Olivier Giroud, who fed Rafael Leao to sprint down the left, then the pull-back was accidentally bundled into his own net by Miguel Veloso.

Moments later, they nearly did it again, losing the ball cheaply as Giroud completed a quick give-and-go with Brahim Diaz, dinking the finish over the goalkeeper and inches wide of the empty net.

Milan returned the favour, because Koray Gunter got down the left and his finish seemed to be within Ciprian Tatarusanu’s grasp until a decisive deflection from Matteo Gabbia at the near post. Because of that, it was credited to Gunter rather than a Gabbia own goal.

Verona threatened from a corner, as Gunter got in front of Pierre Kalulu at the back post, but tried to knock it back into the middle rather than go for goal.

Hrustic curled just wide of the far post on the counter-attack, then Ante Rebic forced a save from a Theo Hernandez through ball.

Verona almost took the lead on 56 minutes when Roberto Piccoli, with practically his first touch, was left totally unmarked for a free header on Veloso’s pull-back that thumped the crossbar. It came back out to Gunter, whose scorcher from the edge of the area skimmed the woodwork.

There was a double Milan chance, as Lorenzo Montipò first parried a Theo Hernandez thunderbolt, then the Ante Rebic header from close range on a Sandro Tonali cross.

Divock Origi blasted wide, but Milan did get back in front when Rebic rolled across from the right for Tonali, who kept his cool to sweep in with the inside of the boot from 12 yards. Curiously, the last goals scored by Tonali were also in this fixture during last season’s 3-1 victory.

Malick Thiaw came off the bench for his Milan debut and made a desperate block by throwing himself in the way of Piccoli’s strike.

In stoppages, Thiaw came to the rescue again on Milan Djuric from point-blank range, as Verona were always dangerous from set plays, while Tonali forced another save from Montipò at the near post.