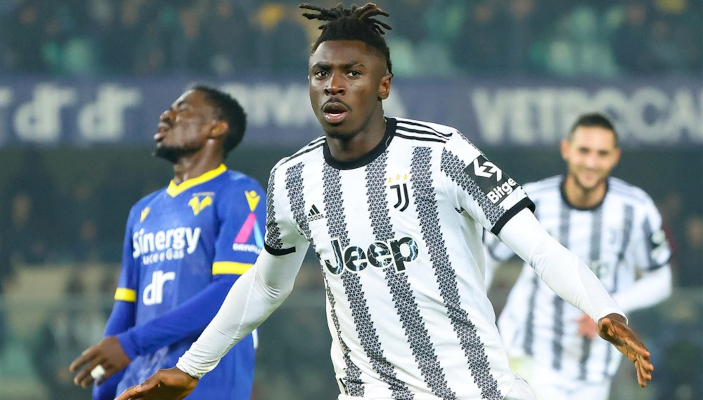 Moise Kean’s deflected strike proved enough to give Juventus a hard-fought win in Verona and surge up the table, but there was VAR controversy over two penalty incidents and Alex Sandro saw red.

The Bianconeri were fresh from a morale-boosting victory over Inter, despite missing Dusan Vlahovic, Federico Chiesa, Weston McKennie, Samuel Iling-Junior, Mattia De Sciglio, Paul Pogba and Kaio Jorge. Moise Kean and Leandro Paredes were back in the squad, with Angel Di Maria only fit for the bench. Hellas had lost eight on the bounce, with Giangiacomo Magnani suspended, Marco Davide Faraoni, Ivan Ilic, Ajdin Hrustic, Diego Coppola and Roberto Piccoli not fully fit.

Ibrahim Sulemana was making his first ever Serie A start, but almost scored after three minutes with a half-volley drilled just wide from the edge of the area.

Mattia Perin also plucked a Kevin Lasagna strike out from under the bar, then Danilo’s desperate block prevented Milan Djuric finishing a counter-attack from nine yards.

Arek Milik fired straight at Lorenzo Montipò, who palmed away a Manuel Locatelli curler, and from the resulting corner Bremer volleyed well over.

Sulemana turned an angled drive across the face of goal when sent clear by a defensive error, and the offside flag was probably incorrect, as Locatelli got the final touch.

After the restart, Pawel Dawidowicz at full stretch just failed to connect with a free kick at the back post, while Moise Kean sliding in couldn’t meet an Adrien Rabiot assist.

The deadlock was broken with a bit of luck, as Milik and Rabiot combined to send Kean running through the middle and his shot took a massive deflection off Dawidowicz, so even though Montipò got a hand to it, this was not enough to keep the ball out.

Leonardo Bonucci charged down a powerful Lasagna effort, but Verona were furious when Miguel Veloso’s volley was redirected onto Danilo’s hand from point-blank range inside the penalty area and VAR decided not to recommend an on-field review.

There was more controversy when Verona were awarded a penalty for Bonucci’s high boot on Simone Verdi, but that was revoked after a VAR review showed the Juventus defender touched the ball first in what was an unorthodox, but effective technique.

Angel Di Maria’s volley flashed across the face of goal after a corner was not cleared effectively.

Alex Sandro saw red in stoppages, as the substitute shoved Kevin Lasagna right on the edge of the area when he was clear on goal from a Thomas Henry pass, but Verdi turned the resulting free kick over the bar.