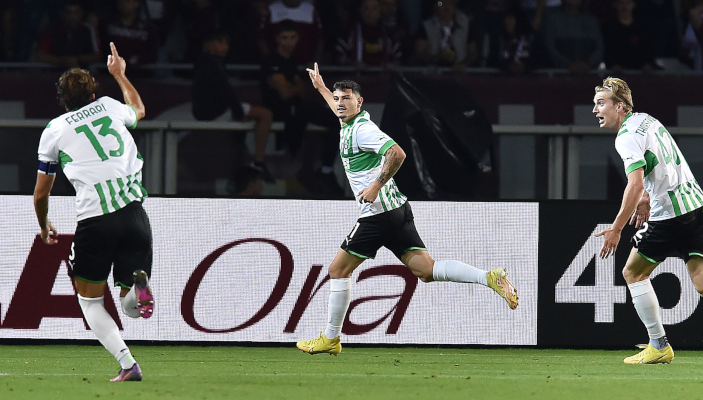 Sassuolo hit the woodwork with Davide Frattesi and Agustin Alvarez Martinez snatched victory away to Torino deep into stoppages.

Ivan Juric was back on the bench after missing a couple of games due to pneumonia, missing Samuele Ricci, Aleksey Miranchuk and Etrit Berisha, losing Mergim Vojvoda in the warm-up. The Neroverdi were decimated with Ruan Tressoldi suspended, Domenico Berardi, Hamed Junior Traore, Mert Muldur and Gregoire Defrel injured, so Luca D’Andrea was given his Serie A debut just 11 days after turning 18.

Demba Seck had a couple of pops from distance, while D’Andrea surprised Alessandro Buongiorno on a long ball and pulled back for Andrea Pinamonti, whose shot was charged down.

D’Andrea’s curler was plucked out of the air and Toro broke through when Nikola Vlasic hit the upright and Valentino Lazaro was ready to tap in the rebound. However, it was disallowed using VAR because Vlasic was offside.

D’Andrea impressed again on the attack, denied by a desperate Buongiorno block, and from the resulting corner Davide Frattesi’s volley thumped the near post and was somehow palmed away by Vanja Milinkovic-Savic.

Agustin Alvarez cut inside from the left and fired right-footed over the bar from the edge of the box.

Deep into stoppages, with only 15 seconds left on the clock, Sassuolo took the lead when Rogerio whipped in a cross from the left and Alvarez got in front of Buongiorno for a glancing header.