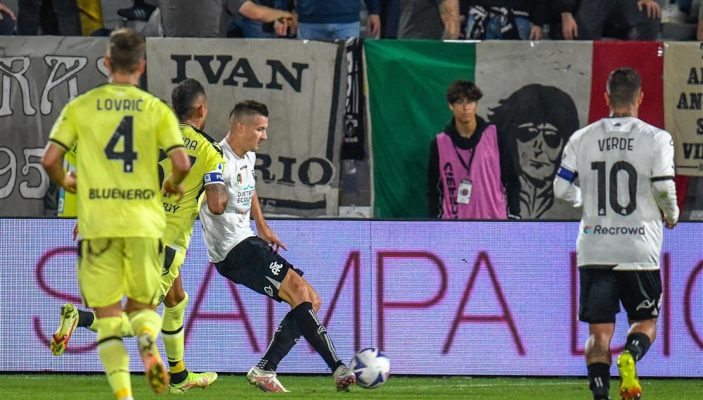 Arkadiusz Reca saw his goal cancelled out by Sandi Lovric, as Spezia and Udinese continue their winless streaks and play their first ever Serie A stalemate.

Both sides were without a win in at least five rounds, while Luca Gotti faced his former club for the first time. Viktor Kovalenko and Emmanuel Gyasi were out injured for the hosts, while Bartlomiej Dragowski pulled out in the warm-up with a back problem. Destiny Udogie, Jean-Victor Makengo, Rodrigo Becao and Adam Masina missed the trip.

M’Bala Nzola was sent clear on goal by a Holm ball rolled across from the right, but sliding in fired straight at Marco Silvestri.

Isaac Success thought he had given Udinese the lead after 20 minutes when running onto a Sandi Lovric through ball, cutting back inside a defender and placing the low finish into the far bottom corner. However, VAR showed he was marginally offside.

Tolgay Arslan already on a yellow card was lucky not to receive a second booking for a shirt tug on Daniele Verde after just 24 minutes.

Instead, it was Spezia who went in front when Ethan Ampadu’s inspired cross-field pass found Arkadiusz Reca for a great first touch and he passed it into the far top corner from seven yards.

Verde blasted over from a tight angle down the left, then Spezia had a triple chance in the space of 30 seconds with Ampadu’s volley onto the crossbar after a set play was not cleared properly, then on the resulting corner Marco Silvestri saves on Ampadu and Nzola.

However, Udinese went on the counter from that move and equalised with Success rolling across from the left for Lovric’s tap-in at the near post.

The second half was less frenetic and more even, with Nzola and Verde seeing their shots deflected, then Walace had to clear off the line after Nzola and Holm headers from a free kick.

Spezia had penalty appeals in the final minute for Tucu Pereyra’s clumsy leap on Mattia Caldara, but the referee gave a free kick the other way.

Mato Jajalo set up Ilija Nestorovski to force a save and in stoppages Walace thumped the crossbar with a scorcher from outside the area that almost sent Spezia to another last-gasp defeat.