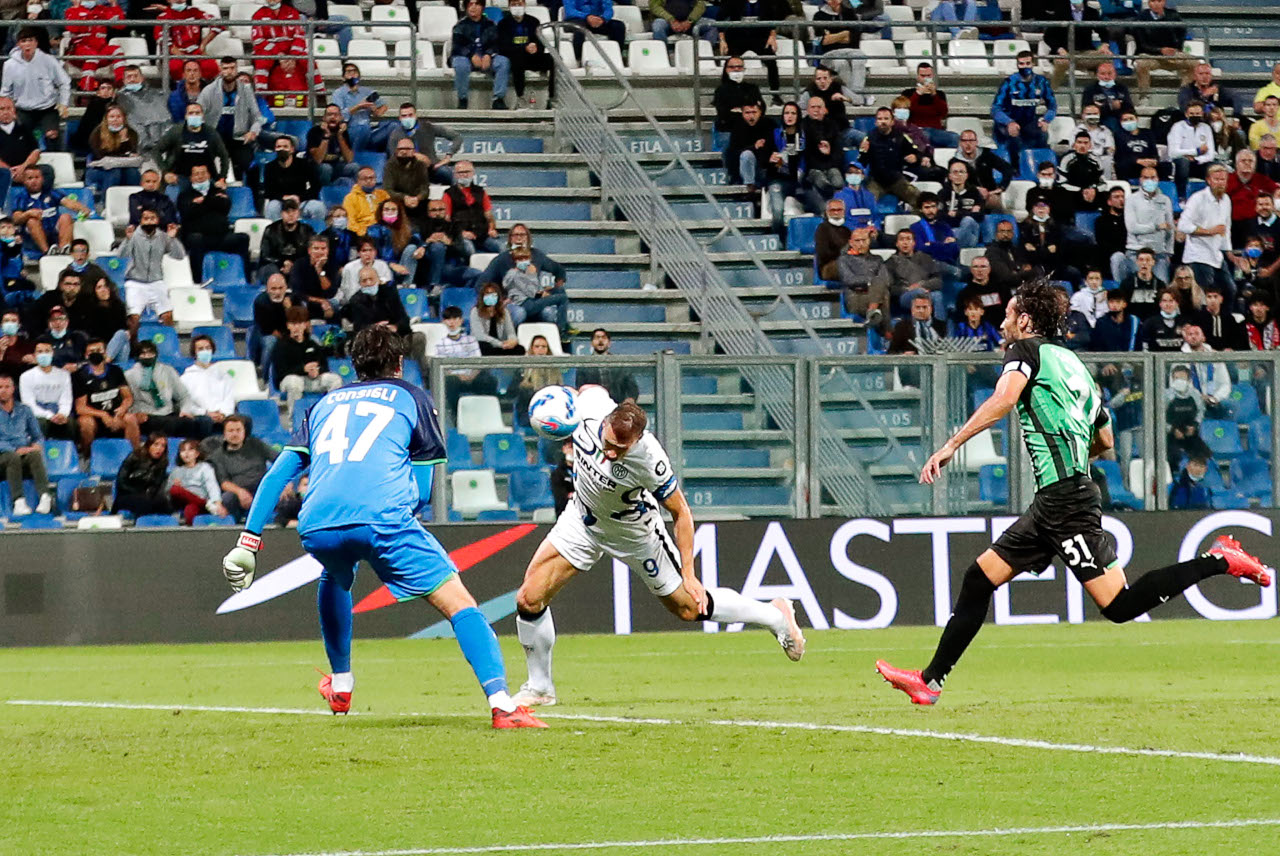 Inter came back from a Domenico Berardi penalty to beat Sassuolo 2-1 with Edin Dzeko scoring and earning a spot-kick, but Samir Handanovic risked a red card before half-time.

The Nerazzurri were coming off disappointing draws with Atalanta and Shakhtar Donetsk, still missing Stefano Sensi and Christian Eriksen, but brought in Denzel Dumfries on the right. The Neroverdi ended their run of three straight defeats by beating Salernitana, with Pedro Obiang and Filippo Romagna long-term absentees.

Jeremie Boga dribbled into the box and was tripped by Milan Skriniar for a penalty, which Domenico Berardi converted, the power taking it beyond Handanovic’s fingertips.

Barella forced a save, while Defrel had to get back for a decisive interception, stopping Ivan Perisic from the tap-in at the back post on Denzel Dumfries assist.

Skriniar had penalty appeals, but seemed to hit a fresh-air shot from point-blank range, while Handanovic had to make a great fingertip save to push the ferocious Berardi volley over the bar.

There was controversy right on the stroke of half-time, as Defrel pounced on a terrible Stefan de Vrij back-pass and Handanovic came running outside his box, realised he wasn’t going to get there and tried to move out of the way. He connected slightly with Defrel as they crossed paths, but the referee and VAR opted not to consider this a foul.

After the restart, Handanovic used his legs to parry a Boga angled drive, then in a similar situation made a one-handed save, while Alessandro Bastoni’s decisive block prevented Djuricic turning in the rebound.

Just as Sassuolo were pouring forward, Simone Inzaghi made a quadruple change and it had an immediate effect, because Edin Dzeko scored with his first touch. Ivan Perisic’s cross flashed across the face of goal, bounced in front of the defender and Dzeko turned in with a diving header.

Gian Marco Ferrari made a decisive block to prevent Dzeko meeting a Federico Dimarco assist, but the referee pointed to the spot when Dzeko sprung the offside trap and Andrea Consigli rushed out, nudging him over just inside the penalty area. Lautaro Martinez converted, but Sassuolo were furious that Handanovic had not been given the same treatment in the first half.

Dzeko had the ball in the net again, but was marginally offside, then Handanovic needed two attempts to take the sting out of Berardi’s strike.