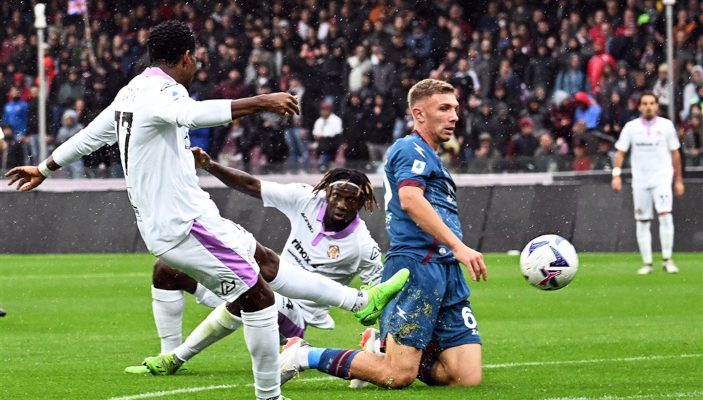 Despite Luigi Sepe saving a penalty twice in the final minute, Cremonese still snatched a thrilling 2-2 draw against Salernitana.

Davide Nicola’s side surged into the top half of the table with their shock win away to Lazio, but Cremonese were rock bottom and still looking for their first win of the season. Norbert Gyomber was out, but Boulaye Dia returned to the starting XI, while the visitors missed Cyriel Dessers, Vlad Chiriches, Ionut Radu and Matteo Bianchetti.

It took under three minutes to break the deadlock, as Marco Carnesecchi only got his fingertips to an Antonio Candreva cross from the right and Krzysztof Piatek reacted quicker than Emanuel Aiwu to tap in the rebound from six yards.

Cremonese equalised in spectacular fashion, as Frank Tsadjout nodded on a long ball over the top and David Okereke smashed the left-foot volley into the far top corner from the edge of the box.

There was controversy on 24 minutes when Tsadjout anticipated Matteo Lovato to a cross from the left and the defender kicked his ankle, but the referee waved play on and VAR agreed.

Candreva’s low cross-shot was heading for a Piatek tap-in until the decisive Emanuel Aiwu interception, then Boulaye Dia’s effort was accidentally charged down by his teammate.

Leonardo Sernicola had the ball in the net with a header on Alessandro Buonaiuto’s cross from the left, but had wandered offside.

Lassana Coulibaly also wasted a good opportunity by losing his balance, but moments later did restore Salernitana’s lead when turning Lochosvili down the right to drill past Carnesecchi at the near post.

Luigi Sepe made a decisive one-handed save on Buonaiuto, who had robbed Matteo Lovato again.

The second half started badly for Lovato, who was stretchered off after a nasty accidental clash of heads.

Giacomo Quagliata only hit the side-netting from the tightest of angles and Sepe made a remarkable save on Sernicola’s header at the back post, but the winger was offside.

Federico Fazio was late on Luca Zanimacchia and after a VAR review, the referee awarded a penalty to Cremonese. Daniel Ciofani’s penalty was parried by Sepe and Castagnetti turned in on the rebound, but it had to be retaken because of both encroachment and the goalkeeper being off his line.

Ciofani took it again, Sepe made yet another save, but this time Ciofani was able to turn in the rebound for 2-2.

Tonny Vilhena blasted over from a tight angle, as it was too late to get more than a point.