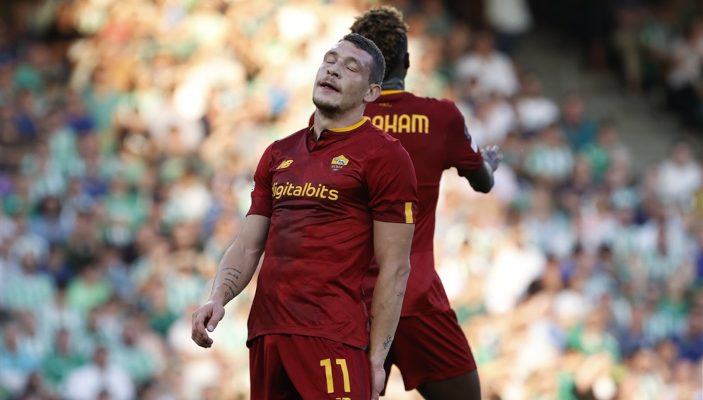 It was a dramatic stoppage-time draw as Karol Linetty’s Torino opener was cancelled out by a last-gasp Nemanja Matic volley after Andrea Belotti fired a Roma penalty onto the post and Paulo Dybala rattled the crossbar.

The Giallorossi were coming off disappointing results against Napoli, Lazio and Sassuolo, with Lorenzo Pellegrini, Leonardo Spinazzola and Georginio Wijnaldum injured, but Paulo Dybala was back on the bench for the first time since that thigh strain while taking a penalty on October 9 and Rick Karsdorp was dropped after Jose Mourinho’s criticism. Toro missed Pietro Pellegri, Perr Schuurs, Ola Aina and Sasa Lukic.

It was a strong start from the Granata, with Nikola Vlasic’s strike charged down and then Toni Sanabria’s free header over the bar.

Nicolò Zaniolo blasted over from a very promising position after Mady Camara won back the ball, as did Aleksei Miranchuk at the other end.

Roma were awarded a penalty for handball on a corner after 25 minutes, but it was revoked after a VAR on-field review, because Samuele Ricci headed it onto his own hand from point-blank range, so it was unintentional.

It was effective, as Wilfried Singo immediately rolled across from the right and Rui Patricio desperately fingertipped it off the feet of Sanabria sliding in.

Gianluca Mancini’s header on a corner was inches wide of the far post, as Vanja Milinkovic-Savic was caught out by the flight of the ball.

Stephan El Shaarawy came on after the restart and straight away saw his strike charged down by Koffi Djidji on an Abraham assist.

However, Toro took the lead when Singo whipped in a cross for Karol Linetty’s free header, as there were many Roma defenders around him, but none of them made the jump. It was the Poland international’s first Serie A goal in two years.

Roger Ibanez at full stretch just failed to connect with a free kick flashing across the face of goal, while Sanabria blasted over from another smart Singo cross.

Jose Mourinho made a triple change, the return of Paulo Dybala after a month out, Andrea Belotti against his former teammates and the Serie A debut of youth team midfielder Benjamin Tahirovic.

Within a couple of minutes, Dybala had forced a save with a snapshot from the edge of the area, as did Stephan El Shaarawy, while Zaniolo saw his shot charged down by a Djidji hand that was hanging just off his thigh, so in a natural position.

Belotti just failed to connect with a cross, then Dybala’s effort hit Djidji and more David Zima penalty appeals were waved away as the ball hit him in the face first, then the hand.

Jose Mourinho saw red for dissent in the final minutes and Roma did receive a penalty in stoppages when El Shaarawy pulled back from the by-line for Dybala, who was clumsily caught on the shin by Djidji.

Belotti stepped up to take the penalty against his old club and drilled it onto the upright in a dramatic miss.

The chaos wasn’t over, because moments later Dybala’s wonderful left-foot curler bounced off the crossbar and came back out to Nemanja Matic for an equaliser on the half-volley.