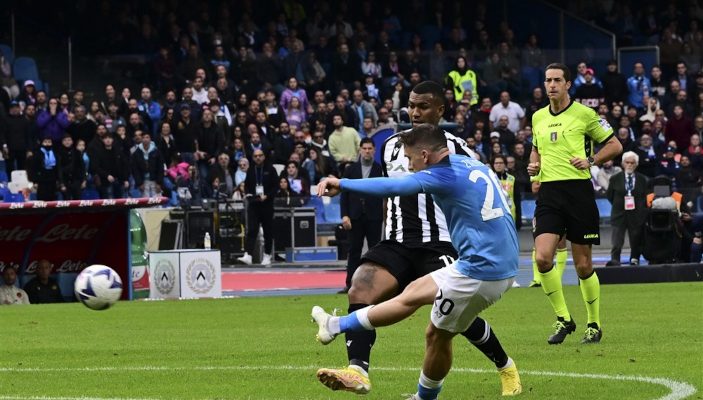 Napoli made it 11 Serie A wins on the bounce to end 2022 as runaway leaders, but it was tougher than expected to break Udinese in a 3-2 thriller.

The Partenopei were eight points clear at the top of the table and seeking an 11th straight victory to close out 2022, with Kvicha Kvaratskhelia and Amir Rrahmani still injured. The Friulani had fallen away from the run of six wins in a row, but had still lost only one of their last 13 rounds. Destiny Udogie, Jean-Victor Makengo, Rodrigo Becao and Adam Masina didn’t make the trip.

Udinese were immediately dangerous on the counter-attack, Alex Meret getting down quickly to parry a Gerard Deulofeu flick from close range.

However, Napoli took the lead when Victor Osimhen out-jumped Jaka Bijol for a glancing header on the Eljif Elmas cross from the left.

Things got even worse for Udinese when Deulofeu suddenly crumpled to the ground and burst into tears as he spoke to medical staff, suggesting a serious injury.

Napoli’s second was a counter-attack, sparked by the Osimhen back-heel flick for Chucky Lozano, whose slide-rule pass found Piotr Zielinski on the edge of the area for a right-foot curler into the top corner.

Meret flapped at a Sandi Lovric cross-shot and there was a crucial block on Tolgay Arslan in the box, while Ehizibue fired horribly wide from an excellent position.

Just as Udinese were threatening, Napoli added a third on the counter-attack. Andre-Frank Zambo Anguissa spread the play down the left for Elmas, who cut inside Bijol to beat Marco Silvestri at the near post.

It was nearly 4-0 moments later, Silvestri palming an Elmas volley out from under the crossbar, then bravely rushing out to stop an Osimhen overhead-kick.

Osimhen also stung Silvestri’s gloves at the near post after a strong solo run from Anguissa, but Udinese did finally get a consolation goal when Isaac Success chested down the assist for an Ilija Nestorovski half-volley.

Moments later, it was 3-2, as Lazar Samardzic robbed Kim Min-jae and surged forward to blast low into the far bottom corner.

The Friulani, who earned more points than anyone else from trailing situations this season, continued to pour forward and put Napoli under real pressure until the final whistle with Roberto Pereyra’s volley deflected wide.

One Comment on “Serie A | Napoli 3-2 Udinese: Spalletti’s Eleven”