Serie A | Napoli 3-0 Bologna: the Azzurri send signal to rivals 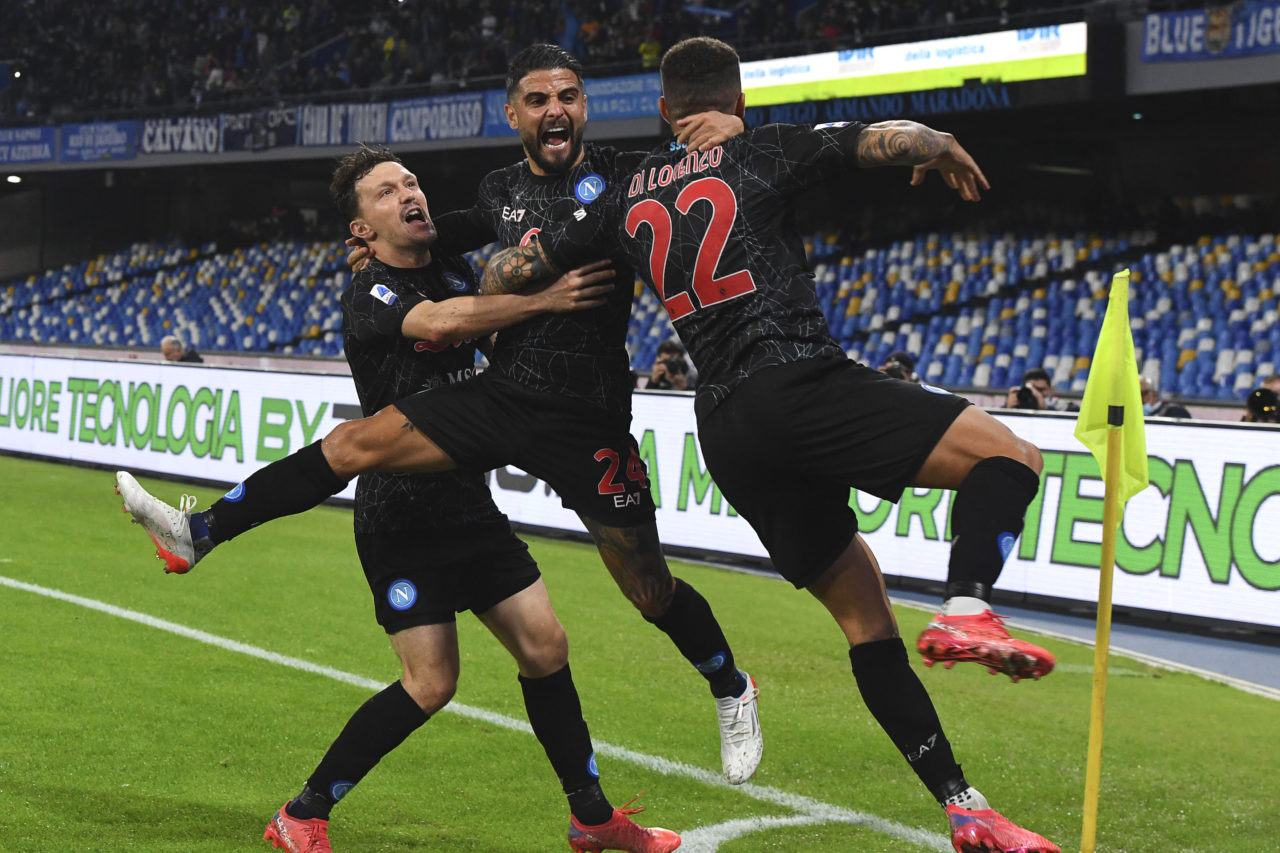 Captain Lorenzo Insigne scored a brace from the penalty spot when Napoli ran Bologna ragged in a 3-0 win at the Stadio Diego Maradona on Thursday.

Milan asked for a reaction from Napoli by winning their home game against Torino 1-0 and Luciano Spalletti, who was suspended after the red card against Roma last time, sent out a strong XI to compete with Sinisa Mihajlovic’s men.

Bologna were pegged back from the first minute and looked to hit Napoli on the counter when they managed to get on the ball, but the Partenopei seemed in control from the start.

The first 20 minutes were pacey and intense, with Victor Osimhen involved in everything going forward.

The Nigerian found Lorenzo Insigne on the break and played the Italy international through on goal, one-on-one with Lukasz Skorupski in the Rossoblu goal.

Insigne tried to dink it over the rushing goalkeeper but didn’t have enough power and gave the defenders a chance to get back in time to clear for a corner.

But only minutes later, the visitors were hit when trying to play out from the back. After 17 minutes, the ball ended up at Fabian Ruiz’s feet outside the area and the Spanish midfielder smashed it into the back of the net when he bent his strike around the defenders and past Skorupski from 20 yards.

Bologna struggled to respond, as Napoli were in full control after the opening goal and Napoli kept pushing for the second.

Zambo Anguissa’s attempt from outside the area went wide, while Osimhen tried from a difficult angle, but sent the ball into the stands.

But the Partenopei were eventually handed an opportunity from the penalty spot and Bologna were furious with the decision after 40 minutes.

Gary Medel went up against Osimhen in the area and was initially awarded a free kick in the duel, but VAR called the referee to look at the situation and he saw Medel using his arm to reach the ball before Osimhen.

The Chilean was booked for dissent after his reaction to the decision, before Lorenzo Insigne converted the penalty after 41 minutes and gave Napoli a two-goal lead at half-time.

It was mostly Napoli on the ball in the first 10 minutes of the second half too, but Musa Barrow threatened to reduce the deficit for Bologna after 53 minutes.

The former Atalanta man did well to claim the ball at left and cut back inside before he sent a missile towards the far corner, only missing the target by a few inches.

But it was the home side who kept pushing for more and wanted to give a big reaction to falling behind Milan for a few days.

Osimhen was chasing his sixth goal and came close on a few occasions, but wont he side another penalty when he was brought down by Ibrahmia Mbaye in the area when the two were battling for the ball in the 59th minute.

Insigne stepped up for the second time and smashed it into the bottom corner. Skorupski couldn’t do anything with the effort, despite going the right way.

The captain, on a hat-trick. was replaced a few minutes later by Piotr Zielinsi, while Hirving Lozano made way for Matteo Politano to keep the Partenopei attack fresh for the remainder of the game.

Osimhen kept pushing for a goal and Bologna struggled to get out from the back in a frustrating match against a home side who were superior in all aspects.

The visitors were obviously missing Marko Arnautovic’s presence up front, as they never managed to hold the ball up and were forced to defend for most of the game.

Eljif Elmas was one of the most influential players once again for the Partenopei, while Anguissa continued his impressive form in the Partenopei shirt.

The former Fulham midfielder hit the upright from 30 yards in the 72nd minute, as Napoli were always closer to making it four.

Dries Mertens and Diego Demme were introduced for the last 15 minutes, replacing Elmas and Anguissa.

Bologna continued to make changes, but none of them impacted the game, as substitute Andreas Skov Olsen was barely on the ball after coming on in the 63rd minute.

Riccardo Orsolini had a rare opportunity after 76 minutes, but his effort was nowhere near testing David Ospina in the Napoli goal.

Fabian tried again after 79 minutes, but this time his effort was blocked and went for a corner. The intensity dropped a bit during the last 10 minutes, even if Mertens was eager to show he can contribute for the Azzurri this season.

Ospina was called into action a few times towards the end, as Bologna went looking for a consolation goal.

Faouzi Ghoulam was given his first minutes for Mario Rui after 86 minutes, as the Algerian returned from injury to play the remaining four minutes.

A comfortable win for Spalletti’s men, who are back on top in Serie A on goal difference, picking up their ninth win and their seventh clean sheet.