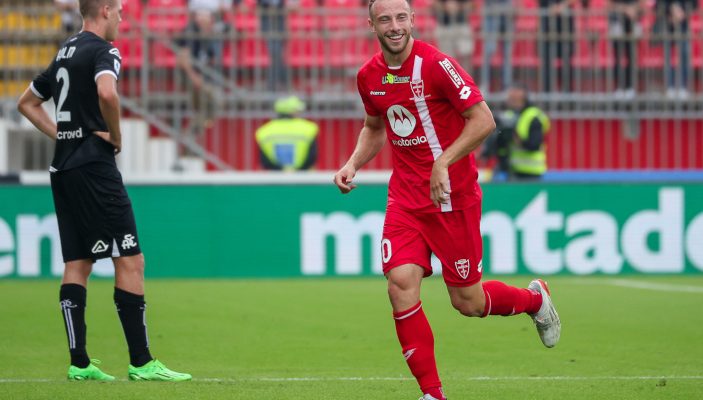 Monza made it three victories in a row, all of them with clean sheets, as Carlos Augusto and Pablo Mari saw off Spezia.

The hosts were on a roll, winning both games under coach Raffaele Palladino against Juventus and Sampdoria without conceding a single goal. Andrea Petagna and Luca Marrone were still carrying knocks, while Spezia missed Jacopo Sala, Arkadiusz Reca and Petko Hristov after their 4-0 defeat at Lazio.

There was a contentious start, as in the opening five minutes the referee awarded a penalty to Spezia, revoked after the VAR review showed if it did hit Nicolò Rovella on the hand, then it was flush to the body and certainly not worth a spot-kick.

Patrick Ciurria tested Bartlomiej Dragowski from distance, while a cheeky M’Bala Nzola back-heel nutmeg sent Kevin Agudelo down the right, but the pull-back was crucially intercepted by Armando Izzo.

Monza took the lead with a well-worked move, releasing Carlos Augusto down the left flank for him to drill in a right-foot strike across the goalkeeper from a tight angle. It was the midfielder’s debut Serie A goal.

Agudelo was brought down right on the edge of the area, from which Bourabia turned a free kick over the bar, then Carlos Augusto ran from his own half only to run out of steam and fire straight at Dragowski.

Monza doubled their lead with Pablo Mari in a crowd managing to volley an Andrea Barberis corner under the bar from close range.

Daniel Maldini came off the bench for Spezia and stung Michele Di Gregorio’s gloves and there were penalty appeals, but Emmanuel Gyasi’s shot seemed to hit Luca Caldirola on the ribs.

One Comment on “Serie A | Monza 2-0 Spezia: Hat-trick of victories”