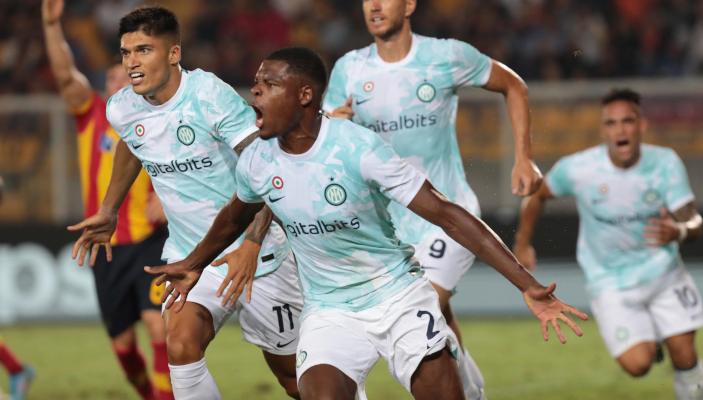 Romelu Lukaku saw his goal cancelled out by Assan Ceesay and Wladimiro Falcone made stunning saves, but Inter would not give in and snatched victory with the last kick of the game through Denzel Dumfries.

The Nerazzurri missed Danilo D’Ambrosio, but Marcelo Brozovic recovered in time from a calf problem to start. Lecce were promoted as champions of Serie B last season, though Alessandro Tuia and Kastriot Dermaku were injured.

It took circa 82 seconds and his first touch for Lukaku to get back on target in Serie A, as Matteo Darmian knocked down a Federico Dimarco cross at the back post and Lukaku was ready to nod in from point-blank range.

Hakan Calhanoglu stung Wladimiro Falcone’s gloves from distance, but Lecce’s situation got even worse when Mert Cetin limped off after 20 minutes, leaving them with no genuine centre-backs.

Gabriel Strefezza tested Samir Handanovic at the back post and Lecce equalised at the dawn of the second half. It was a classic counter-attack, Assan Ceesay completing a give-and-go with Federico Di Francesco to slide the angled drive into the far bottom corner from a tricky position.

Gabriel Strefezza’s curler sailed just over the bar and Handanovic was almost propelled back into his net by a rocket of a Kristijan Bistrovic free kick.

Falcone also had to make a save on Dimarco’s volley and a Denzel Dumfries header deflected off a defender to loop strangely and hit the inside of the far post.

Lautaro Martinez nodded wide, while Handanovic got his fingertips to a Lameck Banda scorcher at the near stick. Lukaku had the ball in the net after Stefan de Vrij’s header on a corner was parried, but only kicking it out of the goalkeeper’s hands.

Falcone was increasingly under siege to beat away Lautaro Martinez’s attempt, then made a double save on both Denzel Dumfries and the Lukaku follow-up.

Edin Dzeko had penalty appeals in the final minutes, but seemed to go down too easily. Deep into stoppages, after a series of set plays, Inter whipped in a corner, Lautaro’s header went past Dzeko, but was turned in with Dumfries and his stomach from point-blank range.