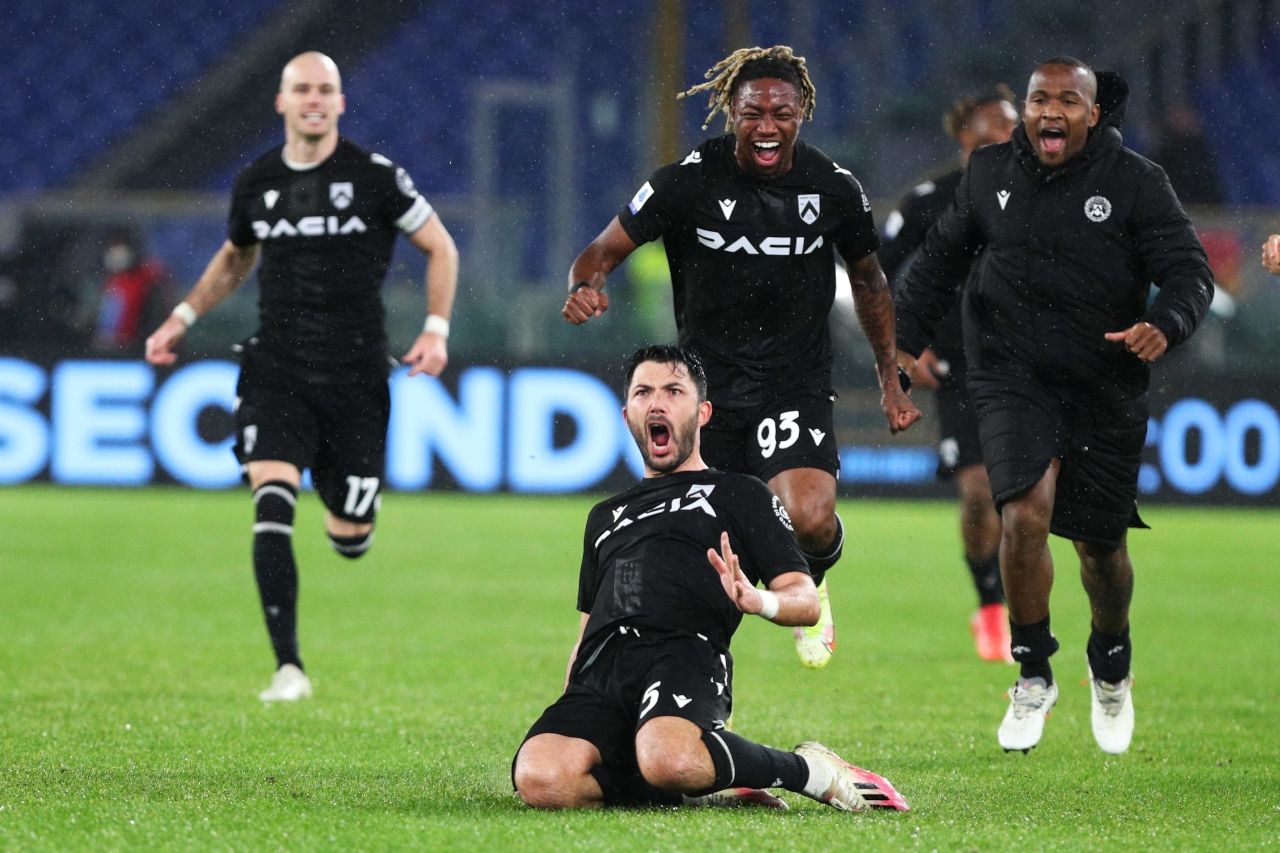 It was an extraordinary game of football with eight goals, three red cards, VAR drama, a Lazio comeback from 3-1 down to lead 4-3 and stoppage-time equaliser plus brawl.

Luiz Felipe was suspended, so Patric moved to centre-back after the 4-0 hammering to Napoli at the weekend. Luca Gotti was Maurizio Sarri’s assistant manager at Chelsea and increasingly under pressure after poor results, so Udinese switched to a 4-4-2 formation with Roberto Pereyra injured after dislocating his shoulder.

It was the visitors who took the lead after 17 minutes when Mato Jajalo floated a ball over the top and Beto beat Patric in the air for a header that bounced right in front of Pepe Reina to reach the far bottom corner.

Francesco Acerbi nodded over the bar from a short corner, while Luis Alberto volleyed off target from a very promising position.

Udinese doubled their lead when winning back possession inside their own half, Isaac Success sending Beto sprinting to out-race Manuel Lazzari, go round Reina and score from a tricky angle.

Lazio got back into it moments later, Felipe Anderson breaking down the right and pulling back from the by-line, where a double deflection allowed Ciro Immobile to turn in.

Immobile went down in the box when running with Samir and was booked for dissent when he didn’t receive the penalty.

Instead, the Friulani added a third before the break with another counter-attack sparked by Success, as Gerard Deulofeu dribbled in from the right and rolled across for Nahuel Molina to slide in from eight yards.

Lazio closed the gap again after the restart, as Elseid Hysaj rolled across for Immobile, whose first touch was poor, but Pedro steered the loose ball into the far bottom corner through a sea of legs.

Beto went on the counter attack, Reina and then Acerbi making the block at the near post, but the Aquile completed the comeback with a moment of magic from Sergej Milinkovic-Savic, who curled in off the inside of the far top corner with an unstoppable left-foot strike from distance.

However, the game changed again moments later, as Patric was having a nightmare performance, culminating in a second yellow card for holding onto Success with both hands for far too long.

Molina soon balanced it out again with a similar second yellow, in his case for leaping elbow jutted out into Stefan Radu’s ribs.

Rodrigo Becao went off with a hamstring strain, then Pedro’s half-volley flashed just wide on a Milinkovic-Savic knock-down.

There was more drama when Acerbi nodded in the Toma Basic free kick and the offside flag was raised, but after several minutes for the VAR check, it was given because Walace was keeping him level. Lazio were leading for the first time after being 2-0 and 3-1 down.

With two injuries and the long VAR check, there were 10 minutes of stoppages, in which Udinese poured forward in search of an equaliser.

Immobile also had the ball in the net again, but was clearly offside.

The drama wasn’t over, as Udinese received a free kick on the outside edge of the box for Zaccagni’s coming-together with Brandon Soppy. Fernando Forestieri took it short for Tolgay Arslan to smash first-time into the roof of the net and 4-4.

A brawl broke out when Udinese players celebrated too close to the Lazio bench, resulting in a red card for Walace.