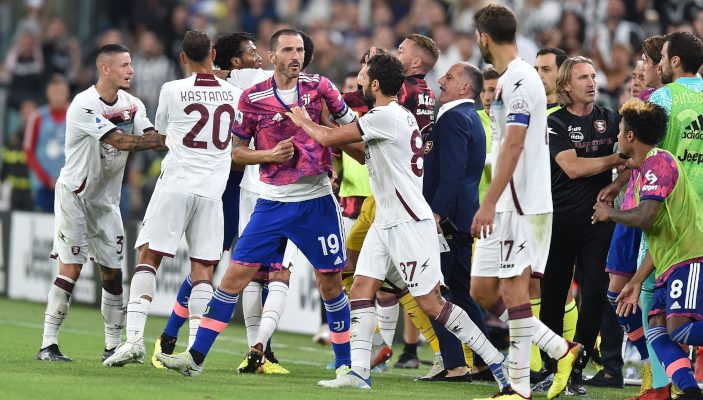 Juventus came back from 2-0 down at half-time for a chaotic draw with Salernitana thanks to a Leonardo Bonucci rebound saved penalty, but there was a disallowed Arek Milik winner and three red cards in stoppages.

The Bianconeri were smarting after three draws in the opening five Serie A rounds and a Champions League defeat to PSG. Adrien Rabiot and Manuel Locatelli were the latest additions to the injury list with Angel Di Maria, Paul Pogba, Wojciech Szczesny, Federico Chiesa and Kaio Jorge. Salernitana were unbeaten in four and Boulaye Dia on sparkling form with three goals and two assists, but Franck Ribery, Ivan Radovanovic, Emil Bohinen and Matteo Lovato were injured, so Krzysztof Piatek got his first start.

Bremer blocked Piatek of at the by-line, then Fabio Miretti threatened early on, squirming between two defenders and shaking off Antonio Candreva before forcing a save at the near post.

Luigi Sepe performed a double save on Miretti and the Moise Kean follow-up, although the latter was offside.

Instead, Salernitana took the lead when Juan Cuadrado failed to intercept a cross-field ball, Pasquale Mazzocchi broke away down the left and flashed a ball across the face of goal where Candreva bundled over the line with his stomach from a yard.

It was only the second ever goal Salernitana scored against Juventus in Serie A, the other by Marco Di Vaio in May 1999.

Dusan Vlahovic had the ball in the net on 39 minutes from a Kean pass, but he was offside when shaking off defenders to prod into the far bottom corner.

Mattia Perin smothered a Piatek strike on Boulaye Dia assist, then on the stroke of half-time Leandro Paredes misjudged a ball down the right, allowing Dia to roll across for Piatek, his shot charged down by Bremer’s arm for a penalty. Piatek converted by sending Perin the wrong way, giving Salernitana a shock 2-0 half-time lead in Turin.

Arek Milik replaced Kean and Juve got back into the game, as Filip Kostic got away from Lassana Coulibaly down the left and stood up the cross for a towering Bremer header into the ground.

Moments later, Federico Fazio turned the ball onto the upright of his own goal when trying to clear a Vlahovic cross, but the offside flag saved his blushes.

Miretti wasted a couple of promising opportunities with heavy touches, while Vlahovic cut inside for a left-foot curler palmed round the far post by Sepe.

Vlahovic blasted just over the bar, while Perin smothered a Dia attempt from the edge of the area and the Leandro Paredes free kick was off target.

Danilo volleyed Cuadrado’s ball back across the face of goal and just beyond Milik, while at the 89th minute Milik’s snapshot clipped the top of the crossbar.

Deep into stoppages, Tonny Vilhena made an ill-judged tackle on Alex Sandro for a penalty. Leonardo Bonucci’s spot-kick was parried by Sepe, but the defender got on the rebound to equalise.

The drama was nowhere near over, because moments later Arek Milik scored with a glancing header on a corner. He received a second yellow card for over-celebrating, only to then realise VAR intervened and the referee disallowed it for Bonucci’s offside interfering with play.

During this chaos and the on-field review, Cuadrado and Fazio were both sent off – along with Max Allegri – for the touchline brawl.