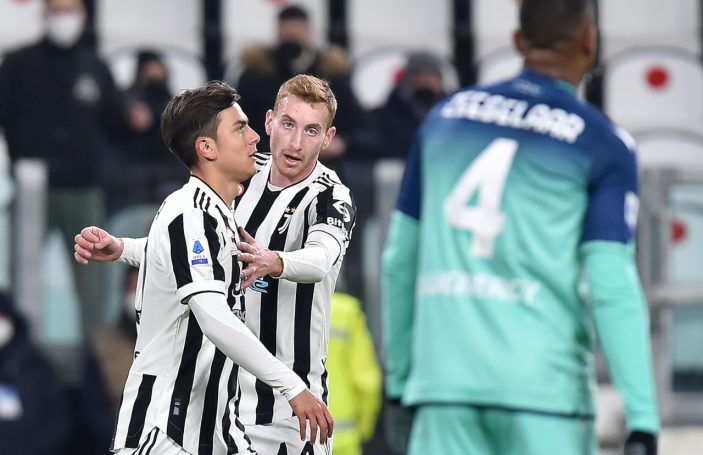 Paulo Dybala and Weston McKennie got the goals to see off a depleted Udinese, but La Joya refused to celebrate and instead glared at Juventus directors in the stands.

The hosts were still smarting after Wednesday’s 2-1 extra time defeat to Inter in the Supercoppa Italiana, missing Leonardo Bonucci, Danilo, Federico Chiesa and Aaron Ramsey, while Alvaro Morata was not 100 per cent fit, but Matthijs de Ligt and Juan Cuadrado returned from suspension. Udinese appealed to have the 6-2 defeat to Atalanta scrubbed and replayed due to COVID cases and the situation remained dire, with nine players and three members of staff testing positive, plus Rodrigo Becao suspended.

Brandon Soppy charged down Moise Kean’s header on a Cuadrado cross, but the deadlock was broken when Arthur’s through ball was knocked on by Kean and Dybala swept it into the top corner with the inside of the left boot from 15 yards. La Joya notably did not celebrate the goal, instead looking angrily into the stands towards the Juventus directors after reports he is ready to walk away as a free agent.

Wojciech Szczesny, available again after finally getting vaccinated, smothered a scuffed Beto snapshot, while Brandon Soppy had penalty appeals waved away as he tried to squirm between two Juve defenders.

Daniele Padelli had to make a tricky save on Cuadrado’s in-swinging free kick at the near top corner and Dybala’s half-volley was charged down before drilling wide from the edge of the box.

There were some Udinese penalty appeals when Brandon Soppy went down under a challenge from Federico Bernardeschi, with some suggestions there was some hair-pulling, but the referee and VAR waved play on.

Weston McKennie should’ve done better when misjudging his header on a Mattia De Sciglio cross, but he learned from it and did not repeat the mistake when a similar move developed moments later.

Bram Nuytinck’s header on a corner was just over for Udinese and Szczesny fingertipped an Isaac Success strike over the bar.