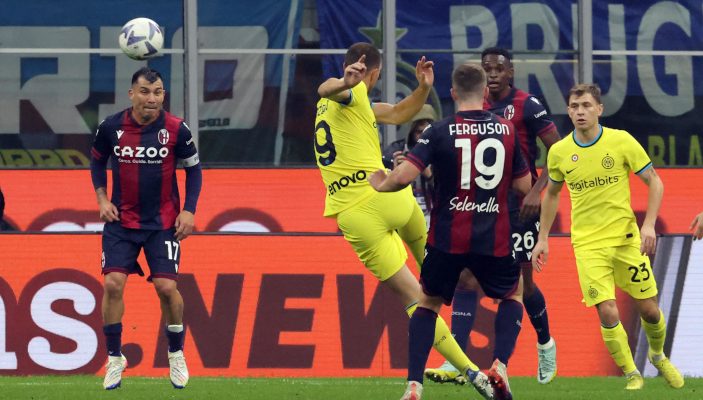 Inter came back from a shock Bologna opener to absolutely pummel their opponents 6-1 at San Siro, including a magnificent Edin Dzeko volley and splendid Federico Dimarco brace.

The Nerazzurri needed to get back on track after the disappointing Derby d’Italia defeat to Juventus, but Matteo Darmian joined Romelu Lukaku on the treatment table and Alessandro Bastoni returned after flu symptoms. Kevin Bonifazi was the only absentee for a Bologna side on a run of three straight wins under Thiago Motta, who famously won the Treble with Inter in 2010 as a midfielder.

Musa Barrow almost punished Inter on the counter in the opening minutes, an angled drive across the face of goal and just wide.

Bologna had another huge chance on nine minutes with Marko Arnautovic at the near post, Andre Onana fortunate to trap the ball between his legs on the line.

Edin Dzeko’s attempt was deflected over by a desperate Lucumi block, but Bologna took the lead with a huge stroke of luck.

Riccardo Orsolini’s volley took a massive deflection off the back of teammate Charalampos Lykogiannis, who didn’t know much about it, but that wrong-footed Onana in goal.

Inter got their equaliser in real style, as a cross was deflected straight up into the air and Dzeko on the edge of the area watched it come down before smashing a magnificent right-foot volley into the far top corner.

Federico Dimarco turned it around with a ferocious free kick from the edge of the area that burst through the defensive wall into the far bottom corner. Bologna were furious, as they felt it wasn’t originally a Lucumi foul on Lautaro Martinez.

Inter went into the break 3-1 up, as Calhanoglu’s in-swinging corner just had to be flicked in at the near post by Lautaro Martinez’s head.

The second half started with a bang too, as Dzeko nodded a Denzel Dumfries cross onto the underside of the bar from point-blank range.

Moments later, Dimarco cut inside past a defender from the right and curled left-footed into the far bottom corner across Lukasz Skorupski. It was a great way to mark the first Inter brace of his career.

Lewis Ferguson’s header and an Arnautovic strike threatened, but Inter received a penalty when Dzeko kicked the ball onto the hand of Sosa, whose arm was out-stretched. Calhanoglu converted the resulting spot-kick.

Dzeko created the sixth for Robin Gosens, springing the offside trap and dinking it over the on-rushing goalkeeper for the ex-Atalanta winger to slide in at the back post.

Kristjan Asllani almost got a seventh with his curler bouncing off the far post, repeating the same exact result from last season.