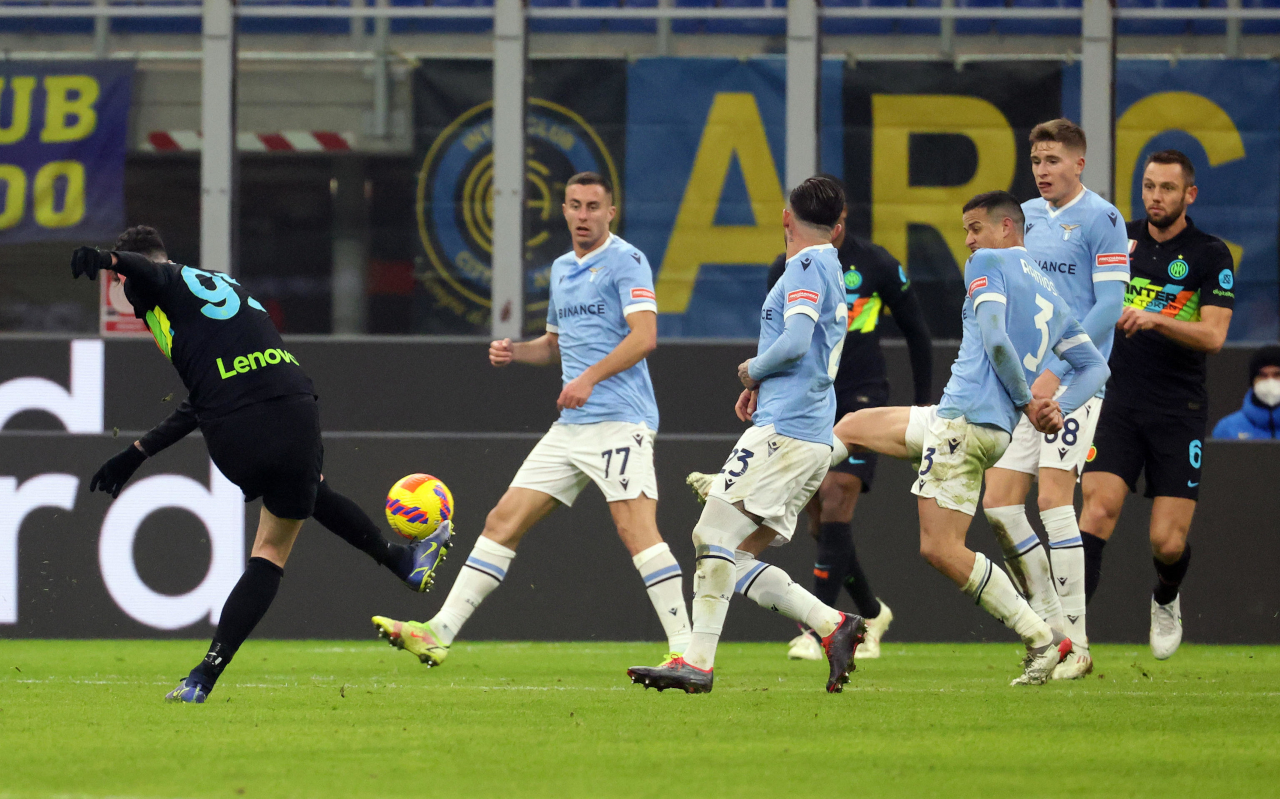 Alessandro Bastoni was the hero for Inter, scoring one goal and assisting another for Milan Skriniar, to wipe out the temporary Ciro Immobile equaliser and retain top spot.

This was the Nerazzurri’s first game of 2022, as the trip to Bologna was called off due to a COVID outbreak within the Rossoblu. Hakan Calhanoglu’s ban therefore passed on to this match, with Edin Dzeko recovering from COVID-19. Simone Inzaghi faced his former club, who missed Francesco Acerbi and Jean-Daniel Akpa-Akpro after a 3-3 draw with Empoli on Thursday.

Ivan Perisic steered his header over the bar at the back post from a Nicolo Barella cross and Inter thought they’d taken the lead on 17 minutes. Alexis Sanchez gathered inside his own half and a perfectly-weighted pass sent Lautaro Martinez clear, but VAR showed the Argentine started his run a fraction early and was offside.

However, the deadlock was broken when another corner came out to Alessandro Bastoni for a ferocious daisy-cutter from 30 metres out that flew into the near bottom corner.

It didn’t last long, because Inter got into a huge mess at the back. A ball over the top saw Ciro Immobile shake off Milan Skriniar, De Vrij was bemused and Samir Handanovic came flying out, allowing the striker to deposit into an empty net.

Lazio almost turned it around completely moments later, Pedro forcing a one-handed Handanovic save one-on-one with his cross-shot.

Sergej Milinkovic-Savic really should’ve put the visitors in front on 52 minutes, but mis-judged the connection on a Felipe Anderson cross from the right and scuffed the finish with the goal gaping.

Inter got back on their feet and started to pour forward, Strakosha parrying an Alexis Sanchez free kick with real difficulty. The goalkeeper then denied Dumfries from close range, the Ivan Perisic follow-up cleared off the line by Luiz Felipe.

Inter restored their lead with two defenders combining, Bastoni whipping in a cross from the left for the head of Skriniar, in off the underside of the bar.

There was absolute confusion soon after, the referee initially thinking Stefan Radu and Mattia Zaccagni were the same player with two consecutive fouls, but realised his error for a booking each.

Handanovic rushed off his line to close down Immobile after a lucky ricochet and a corner bounced around in stoppages to create panic, but Inter held on for another victory.