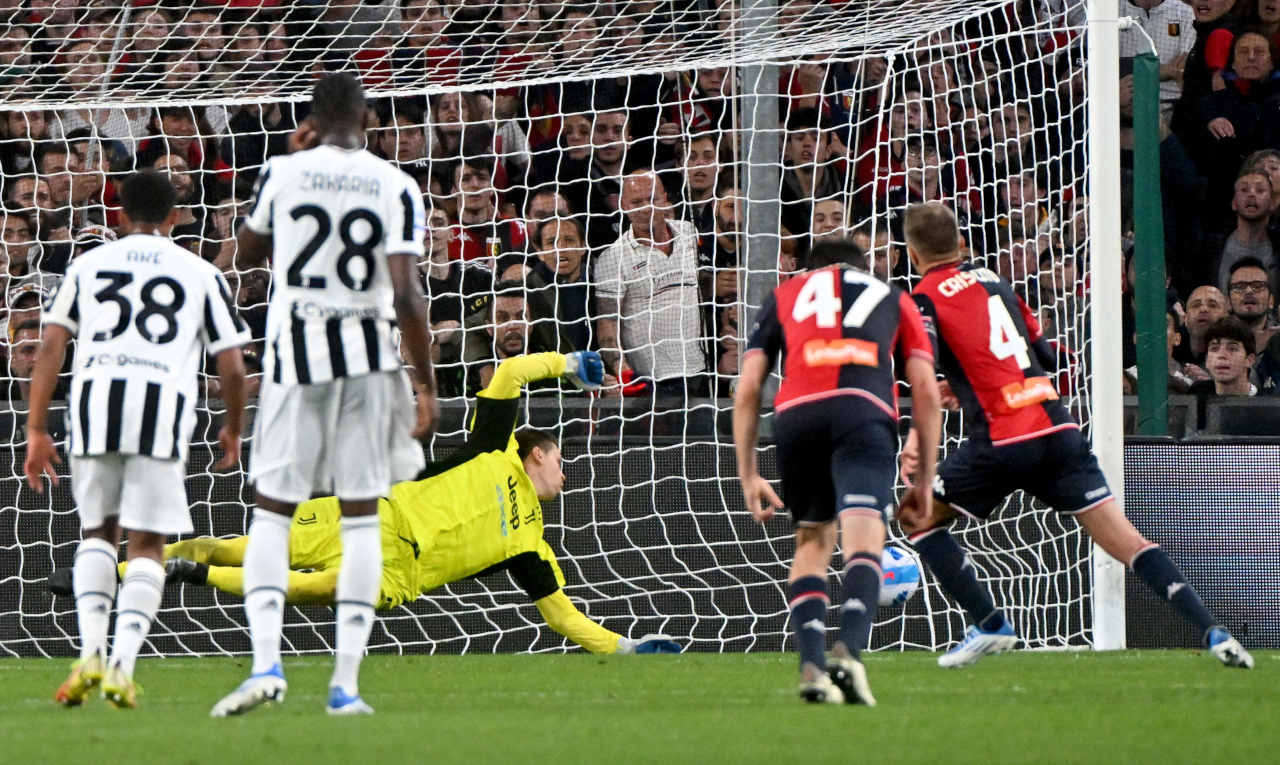 Paulo Dybala scored a wonderful goal, but Genoa completed a dramatic comeback with Domenico Criscito this time in tears of joy for a last-gasp penalty.

The Bianconeri were already guaranteed a top four finish, but didn’t rotate the squad too much ahead of Wednesday’s Coppa Italia Final against Inter. Juan Cuadrado and Mattia De Sciglio returned, with Danilo and Luca Pellegrini joining long-term absentees Manuel Locatelli, Weston McKennie, Federico Chiesa and Kaio Jorge, so 18-year-old Fabio Miretti started his second game in midfield. Genoa were desperate after the defeat to Sampdoria left them four points from safety, with Nikola Maksimovic and Zinho Vanheusden not fully fit.

Moise Kean wasted a huge chance in the opening minutes, nodding over from a Paulo Dybala cross at the back post.

Mattia Destro also turned a header over from a Pablo Galdames corner, while Salvatore Sirigu got his fingertips to a Kean pull-back for Dusan Vlahovic.

Leonardo Bonucci charged down Filippo Melegoni’s attempt and Dybala tested Sirigu from distance, as did Manolo Portanova on Wojciech Szczesny with a scorcher.

Straight after the restart, Destro ballooned over when relatively undisturbed from eight yards, but Juventus did take their chance moments later.

Dybala gathered just outside the D and unleashed a wonderful curling finish with his weaker right foot into the far bottom corner, dipping just beyond Sirigu’s fingertips.

Szczesny had to readjust after a poor Kean back-pass and deal with a Frendrup strike, but Dybala almost had a second when curling with his left foot from a similar position to the goal, this time finding the base of the upright.

Vlahovic rode two tackles to force a save at the near post, while Kean had the ball in the net only after he was flagged offside.

Caleb Ekuban’s header whistled wide, but Genoa breathed a sigh of relief when the referee awarded a penalty on 84 minutes, only to change his mind after a VAR on-field review, seeing Albert Gudmundsson got the ball before Marley Ake.

It proved decisive, because moments later Gudmundsson equalised for Genoa. It was a divinely weighted through ball from Nadiem Amiri and he kept his cool for the angled drive past Szczesny.

It should’ve been 2-1 for Genoa a minute after that, Juve giving it away cheaply only for Amiri to fire straight at Szczesny from nine yards. Amiri also saw a shot charged down by Denis Zakaria.

Kean was limping badly when Alvaro Morata went on the counter and rolled it across for the young striker to incredibly fire wide of an open goal.

That again proved decisive, because moments later Mattia De Sciglio brought down Kelvin Yeboah for a penalty. Criscito had been left in floods of tears just days earlier when his last-gasp penalty was saved against Sampdoria. However, the veteran immediately stepped up and converted with the last kick of the game into the bottom corner, this time left with tears of joy as his teammates surrounded him.

Genoa are still alive and Criscito went from zero to hero.

26 Comments on “Serie A | Genoa 2-1 Juventus: Criscito revives the Grifone”