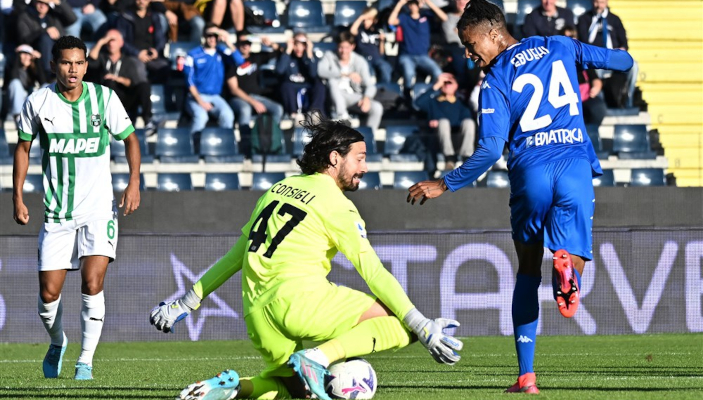 Tommaso Baldanzi’s goal proved enough for Empoli to pick up a precious victory and sink Sassuolo further into mid-table mediocrity.

Both sides struggled more than expected so far this season, as the Tuscans were coming off back-to-back defeats and the Neroverdi lost three of the last four. Koni De Winter, Alberto Grassi and Lorenzo Tonelli were out for the hosts, while suspended Armand Laurienté joined injured Domenico Berardi, Gregoire Defrel and Mert Muldur on the absentee list.

Empoli lost Mattia Destro after just seven minutes to what looked like a hamstring strain and his replacement Sam Lammers skimmed the far post, while Martin Satriano fired over from a tight angle.

Penalty appeals from Sassuolo were rejected for an Ardian Ismajli potential handball.

The Tuscans broke the deadlock when Nedim Bajrami sent Martin Satriano down the left and he pulled it back for Tommaso Baldanzi to toe-poke in first-time.

Razvan Marin’s free kick wreaked havoc in the six-yard box, nobody able to finish it off, while Sebastiano Luperto nodded over the bar.

Lammers saw an angled drive flash across the face of goal, then a ferocious Harroui strike was beaten away at the near post.

Sassuolo almost equalised deep into stoppages, as Guglielmo Vicario flapped at a cross and Agustin Alvarez nodded it over the bar.