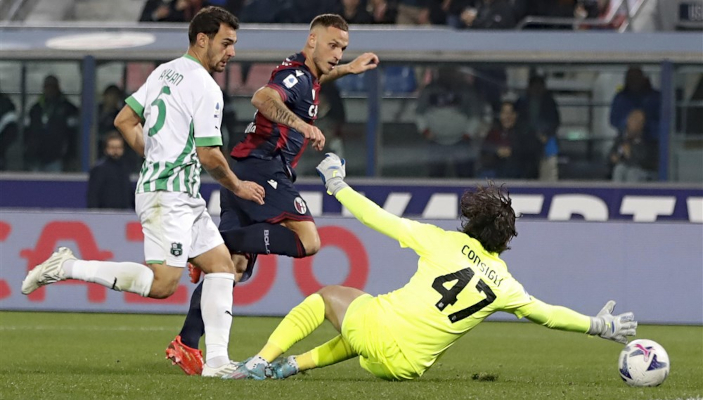 Both teams went into this match locked together on 16 points in mid-table mediocrity. The Rossoblu had managed three wins in a row, before their 6-1 demolition at Inter, and Kevin Bonifazi was still out of action, while Andrea Cambiaso pulled out in the warm-up. Maxime Lopez was suspended with Gregoire Defrel and Mert Muldur side-lined, but Domenico Berardi fit only for the bench.

Hamed Junior Traore came sliding in too late at the back post to steer an Armand Laurienté cross, while Adama Soumaoro made a decisive interception to prevent Laurienté going clear on goal in a give and go with Davide Frattesi.

Andrea Pinamonti stung Lukasz Skorupski’s gloves at the near post, but Bologna took the lead with their first real chance.

After it was won back in midfield, Jhon Lucumi whipped a low cross in from the left and Michel Aebischer got in front of his marker at the near post to flick it into the far bottom corner.

Andrea Consigli spilled a Nico Dominguez scorcher and Lukasz Skorupski did the same with a long-range Laurienté free kick.

Bologna doubled their lead when Roberto Soriano ran forward from midfield and released Arnautovic with a slide-rule pass, the Austrian showing delicate footwork to move the ball around Consigli and score from a tight angle.

Domenico Berardi came on and flashed his shot across the face of goal, while Arnautovic almost pounced on a poor Giorgos Kyriakopoulos back-pass.

Agustin Alvarez saw his volley from a corner charged down, but Bologna extended their advantage with a spectacular curler that Lewis Ferguson placed into the far top corner from the edge of the area.

Skorupski was ready for the Pinamonti back-heel flick.