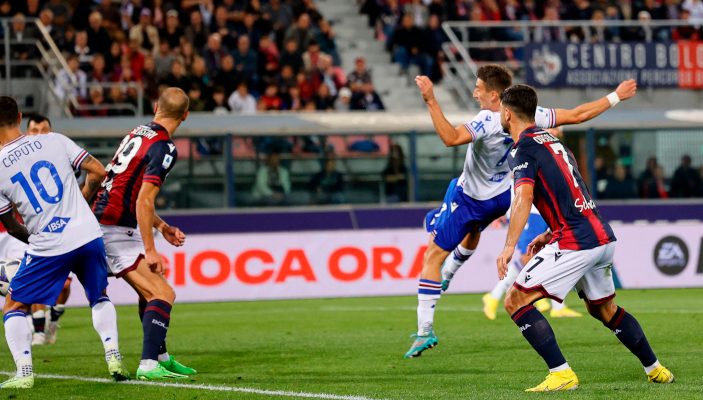 Dejan Stankovic picked up a point on his Sampdoria debut thanks to the Filip Djuricic header, but this draw does little for them or Bologna in the fight to avoid relegation.

It was the debut of new Blucerchiati coach Stankovic, after Marco Giampaolo was sacked with just two points from eight rounds. Thiago Motta had lost both games in charge of Bologna without scoring a goal and missed injured Musa Barrow, but was glad to reunite with his old Inter teammate on the touchline.

Michel Aebischer turned wide from close range on a Riccardo Orsolini roll across from the left in the opening minutes.

There were worrying scenes, as Charalampos Lykogiannis got a knock to the head in a collision with Abdelhamid Sabiri and several minutes later felt dizzy, taken away on a stretcher.

The deadlock was broken when Marko Arnautovic flicked on a great ball in the centre-circle to send Aebischer down the left, cut inside and shot parried by Emil Audero, but turned in on the rebound by Dominguez.

Dominguez almost got a second on 41 minutes, his scorcher from the edge of the box smacking the underside of the crossbar.

Tomas Rincon fired over the bar and Ciccio Caputo had the ball in the net from a Filip Djuricic through ball only after straying offside.

Orsolini was very fortunate to only get a yellow card for his extremely late and high tackle on Rincon, clearly catching him studs-up on the ankle, but VAR did not intervene to suggest a more serious sanction.

Moments later, Sampdoria equalised, as Lukasz Skorupski and Adama Soumaoro did not communicate and collided on the Bartosz Bereszynski cross, so a Medhi Leris wayward shot turned into an assist for the head of Filip Djuricic.

Samp had the chance to win it in stoppages, but Skorupski made a desperate double save on the Valerio Verre daisy-cutter and then a Leris follow-up.