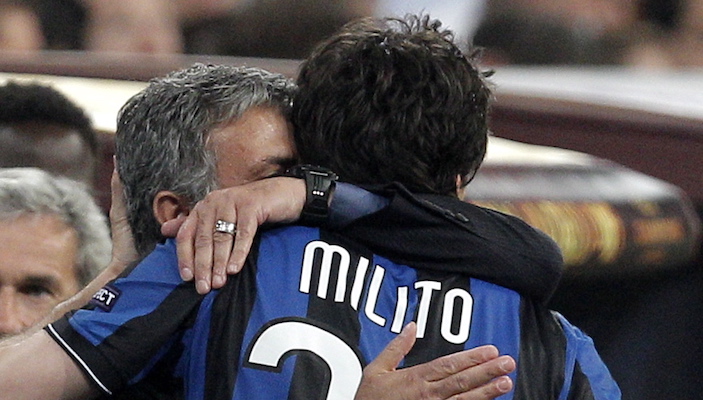 Diego Milito continued his tour of Italian stadiums and took the time to embrace Jose Mourinho ahead of Roma’s clash with Napoli yesterday.

The pair spent a year together in the 2009-10 season at Inter, when Mourinho guided the club to the first Treble in history for an Italian club. That season, Milito scored 30 goals in 52 appearances across all competitions for the Nerazzurri, including two in the Champions League final against Bayern Munich.

Milito is back in Italy again, touring the stadiums and watching matches. He started at Genoa’s Stadio Luigi Ferraris last week before visiting the Stadio Artemio Franchi to watch Inter beat Fiorentina. Yesterday he was in Rome to watch the Giallorossi take on Napoli, where he shared a moment with Mourinho.

The pair embraced and took a photo together, which was shared on Milito’s Instagram page. He accompanied the photo with the caption: “A great emotion to see you again José… how many memories we experienced together.”

One Comment on “See – Milito embraces Mourinho: ‘How many memories we shared’”