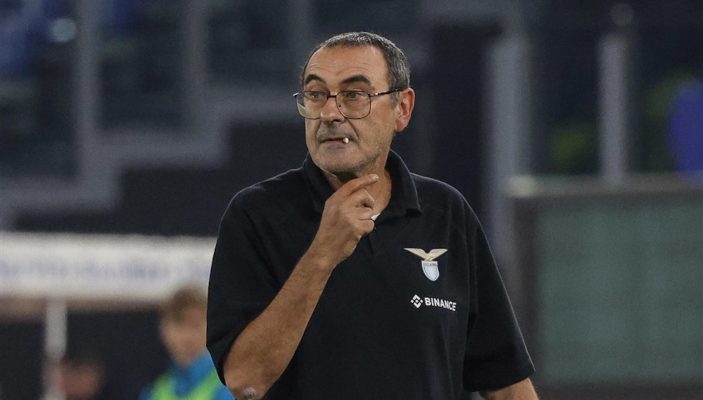 Maurizio Sarri admits the win over Monza was the kind of match where Lazio ‘tended to struggle’ last season, but won’t talk about the meeting with Juventus as a Scudetto battle. ‘Everything is still up in the air.’

The Biancocelesti may have crashed out of the Europa League, but it’s been all positive since then, notching up back-to-back 1-0 victories over arch-rivals Roma and this evening’s opponents Monza.

It took a late goal from 17-year-old Luka Romero, on the rebound from a parried Pedro shot, to secure the three points after Andrea Petagna’s back-heel flick was ruled offside.

“On a psychological level, clearly this was the most difficult match, coming after the tension of the derby, so there was the elevated risk of a collapse in intensity. We did have that for a while in the opening half-hour, struggling to raise the tempo and press, but fortunately we got out of it and went on to win,” Sarri told Sky Sport Italia.

“The table is worth nothing at this stage of the season, so we won’t look at it. What gives us hope is that we won in a situation where last season we often tended to struggle.”

Ciro Immobile made his comeback after 25 days out with a thigh injury, although he was seen pestering the coach to come on far earlier than his actual introduction at the 85th minute.

“He didn’t realise we only had one slot left for the substitution and there were 20 minutes to go, so we couldn’t risk it any earlier.”

What was Sarri’s half-time team talk this evening to shake Lazio up?

“On a tactical level, I just told them we were leaving too many gaps between the lines and needed to close up. I also told them this was a match where we had to dig deep with humility, because Monza are a team who pass the ball around well. We had to be organised and not leave the slightest hint of superficiality.”

Romero came off the bench and scored his debut Serie A goal at 17, becoming the second-youngest Lazio player to find the net after Alessandro Capponi in December 1936.

“He has played even at the age of 16. I try not to talk about him too much, he is working well and improving, so this is the kind of situation where we would do him a favour to not talk too much about him at this moment. He’s got a good head on his shoulders, though, and is on the right track.”

Sarri surprised many when he made the move to Lazio after experiences at Napoli, Chelsea and Juventus, so was asked what potential this squad really has.

“The potential means little unless it is expressed. I don’t think this Lazio side has expressed 100 per cent of its potential, so it has room for improvement.”

This Sunday is the final Serie A match of 2022 before the break for the World Cup, which is a head-to-head between Lazio and fourth-placed Juventus. Does Sarri see it as more of a Scudetto battle or one for the Champions League places?

“At this moment it is just an important match, it seems a bit of a stretch to see anything more in Week 15. The table is still tight, one week you are sixth, the next second, but with 23 points to go everything is still up in the air.”