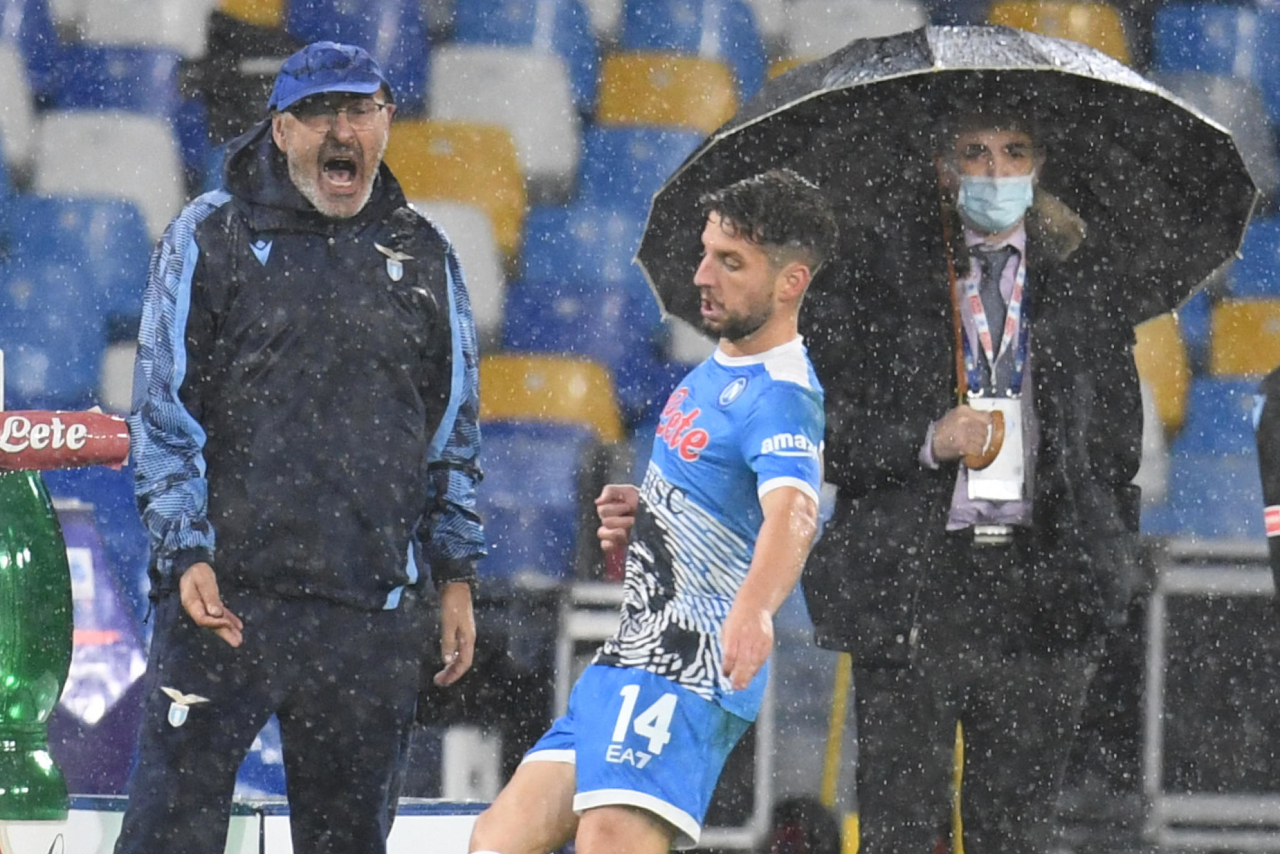 Maurizio Sarri admits he is increasingly frustrated with Lazio after their 4-0 defeat to Napoli. ‘It’s not acceptable to go from 10 to 1 in terms of intensity from one game to the next. The team just deactivates.’

This was his first return to this stadium since it was renamed after Diego Armando Maradona, on the night a year on from El Pibe de Oro’s death when a life-size statue was unveiled.

Piotr Zielinski blasted in the opener, followed by two exquisite Dries Mertens goals, including one with a quick one-touch passing move reminiscent of Sarri’s Napoli.

Fabian Ruiz completed the rout late on with a powerful strike into the far bottom corner.

“The team had made steps forward and, as is often the case, every four or five games we have a performance like this. The defects were even more obvious because Napoli put in an extraordinary performance and in my view is the best team in Serie A at the moment,” Sarri told DAZN.

“It certainly wasn’t the right approach, because we didn’t help our case with the first two goals in the opening 10 minutes, and it was even more difficult from there. If we only press half-way, which we did for almost the entire game, against a team of great passers, naturally it’s going to go like this. We always started the press late and not as a team. We kept doing it individually and late.

“I see a team that struggles to always be focused. Playing every three days is difficult, but it is not acceptable to go from 10 to 1 in terms of intensity from one game to the next. We kept reacting on the reception of the ball, not the transmission of it, so we were always late.”

Lazio always knew it would take a while to adapt, considering the complete transformation of style and tactics from Simone Inzaghi to Sarri.

“We need to understand what these ups and downs are coming from and try to fix them. It’s not easy. I expected everything other than this type of performance tonight. The problem is that the team just deactivates sometimes.”

Felipe Anderson has been particularly poor over the last few games and was hauled off in the second half.

“Felipe is a delicate figure. When he switches off, he goes completely. When he switches on, he’s fantastic. At this moment, he’s in a downward phase, but that has always been his tendency and we are trying to make him less unpredictable, but it’s a journey he needs to go on. It will take time.”

It was Sarri’s first trip back to the Stadio Diego Armando Maradona since it was renamed, having previously visited on the Juventus bench two seasons ago. How did he prepare for this fixture?

“I tried to stay as calm as possible. I came here two years ago and was too emotionally stressed. Naturally, my heart is in this city. I love it, I love the Neapolitans and it will never be a normal visit here for me.”

Dries Mertens, that is special! 💥

Pepe Reina’s face says it all… what a strike! 🚀 pic.twitter.com/IzdRzOzWCt