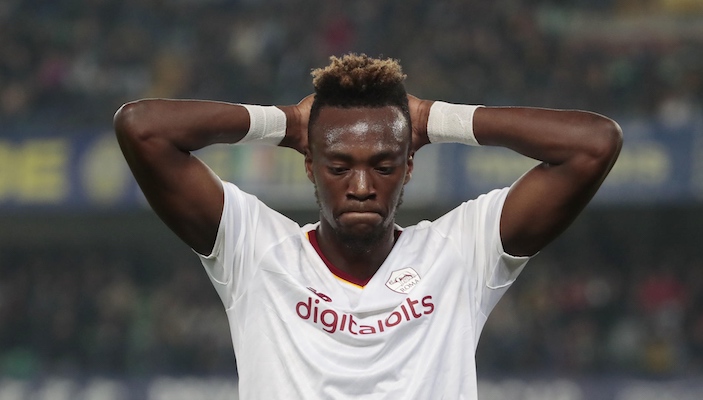 Tammy Abraham has found himself dragged into a tornado of negativity in the Italian capital this season and Roma are open to a possible sale in the summer, reports detail.

The 25-year-old English forward joined the Giallorossi last year in a deal worth around €40m, keen to prove himself after an inconsistent time with Chelsea. His debut season was a success and he netted 27 goals across 53 games under Jose Mourinho, becoming a trusted figure in the eyes of the fans.

Unfortunately for Abraham and Roma, things haven’t gone to plan this season and the Englishman has only scored four goals in 20 appearances across Serie A and the Europa League, frustrating Mourinho.

As reported by Daniele Longo of Calciomercato.com, Abraham is no longer considered unsellable by Roma and they’d be willing to sell him in the upcoming summer transfer window. It’s hard to imagine Chelsea activating the €75m buy-back option attached to his move to the Italian capital, but other English clubs are starting to emerge.

Aston Villa are now seriously considering the idea of picking up Abraham and things could develop in the coming months, especially if the 25-year-old continues to struggle on the pitch for Roma. The Englishman previously spent a positive season on loan with the club and clearly made a strong impression.