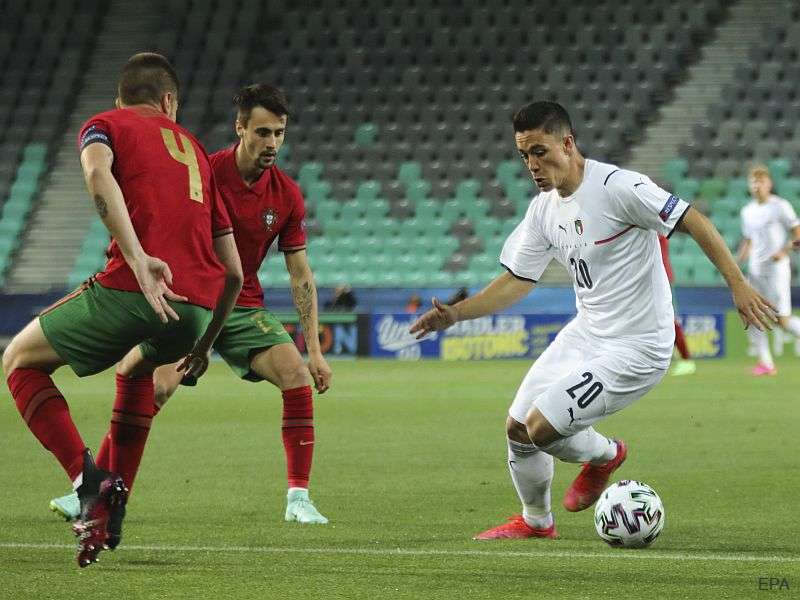 Giacomo Raspadori has had quite a year and it’s nowhere near over yet, because he’ll be spending the summer with the Italy squad at the delayed Euro 2020 tournament, writes Susy Campanale.

Roberto Mancini had to make sacrifices elsewhere in the group to make room for the 21-year-old striker, a product of the Sassuolo youth academy who came through the ranks to represent his hometown club and score his debut Serie A goal in a 2-1 win over Lazio in July 2020.

Pushed into the first team as a regular by an injury crisis in the Neroverdi camp, the youngster grabbed the opportunity with both hands, scoring six goals and providing three assists in what would turn out to be a more than creditable 27 Serie A appearances this season.

That included his absolute highlight, coming off the bench at San Siro with his team trailing 1-0 and then scoring both goals to beat Milan 2-1 in April. Even then it seemed utterly implausible that this inexperienced forward would be part of the Italy squad for Euro 2020, but Roberto Mancini knows the importance of form. Moise Kean had gone badly off the boil at PSG, while the campaign ended with Raspadori on the ascendancy.

Italy have a long history of unexpected stars breaking out at major tournaments, usually forwards like Paolo Rossi or Salvatore Schillaci. Could Raspadori be the next Azzurri surprise to bloom over the summer? He’d be a complete novice, as he has not played a single minute for the senior Nazionale.

His inclusion was even more of an upset considering he wasn’t in the 28-man provisional squad, but that’s because the Under-21 side had first dibs on the Sassuolo striker if they had continued their European Championship beyond the quarter-finals. The Azzurrini’s loss could well be the senior side’s gain.

Raspadori is precisely the kind of player you’d think would be very useful indeed in a brief competition. Where Andrea Belotti and Ciro Immobile do battle with defenders, he is more of a fox in the box, with a natural instinct for where the ball will land and an ability to ghost into spaces between defenders or sneak in at the back post. He has been compared to Antonio Di Natale for his ability to turn defenders and make quick decisions on his finishing, while Raspadori confessed he would prefer to be more like Sergio Aguero.

Strong with both feet, certainly not someone you’d think would win many aerial battles, ‘Jack’ is the kind of player you want to unleash on tired defenders in the second half, especially in a competition that allows for five substitutions per game. Above all, he brings versatility, playing as an atypical centre-forward, a support striker or even in a wider role. He brings something very different from Immobile and Belotti, allowing Mancini to complete his tactical puzzle.