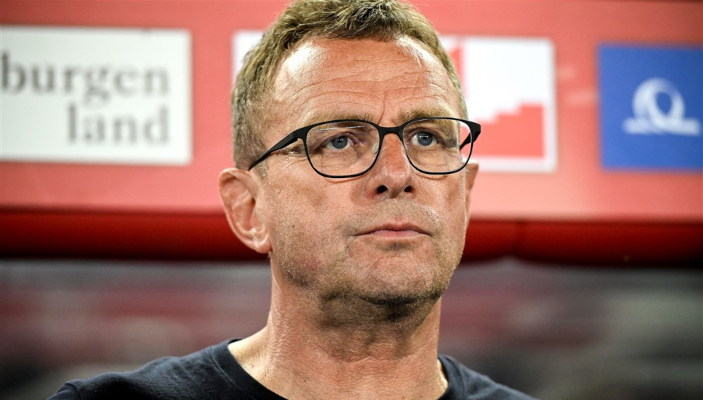 Italy play Austria in a friendly tomorrow, but coach Ralf Rangnick was asked more about his close call with Milan and Cristiano Ronaldo’s Manchester United criticism.

It kicks off on Sunday at the Ernst Happel Stadion at 19.45 GMT.

“We will try to be as good as possible and we want to win,” said Rangnick in his press conference.

“There have been a few changes in the Italy squad, as the side that won the Euros had far more experience, whereas tomorrow it’ll be largely much younger players. They are opening up to the next generation, but will still be tactically disciplined and we can’t wait to take on strong opponents.

“Sometimes the Azzurri start with three at the back, sometimes four, so I am not surprised by the change to this system. We just need to figure out tomorrow if they are playing with one or two strikers.”

Rangnick has had something of an odd career path, since 2019 working largely as a sports director for the Red Bull clubs, then briefly at Lokomotiv Moscow until six months as Manchester United interim manager.

He left that role to take over as coach of the Austria national team in June 2022 and has so far overseen two wins, a draw and four defeats.

This is one of the reasons Cristiano Ronaldo was so bitterly critical during a recent interview with Piers Morgan, claiming he had “never heard” of Rangnick and had zero respect for the manager.

“I have already said, it is not my role to reply to Cristiano Ronaldo, that is for Manchester United to do,” said Rangnick in today’s press conference.

Meanwhile, he also had a very close call with Serie A, as he was in advanced negotiations to take over as coach of Milan in 2020 until a sudden change of tack saw the club extend Stefano Pioli’s contract.

“Milan won the Scudetto, have progressed in the Champions League and worked really well over the last two or three years,” he confessed.

“We have players in the squad who are in Serie A, like Stefan Posch and Marko Arnautovic at Bologna. We watch Serie A games, it is a very important league. Napoli have been spectacular so far.”