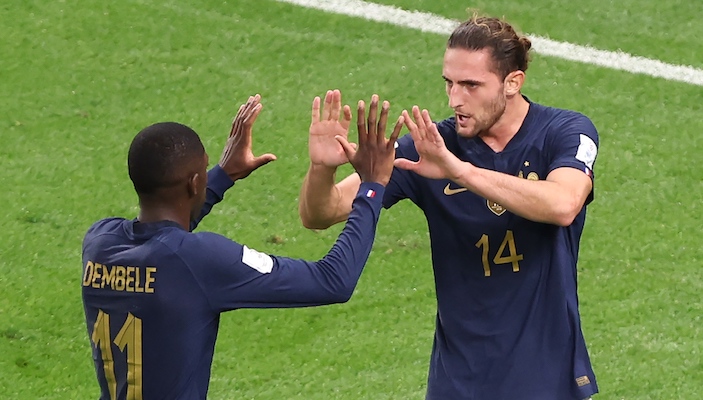 Juventus midfielder Adrien Rabiot admits he’s going through the best period of his career and with France about to face England in the World Cup, he has ‘always wanted to play in the Premier League.’

The quarter-final will be on Saturday in Qatar and the former PSG player spoke at a press conference about his current form and future, seeing as his contract with Juve runs out in June 2023.

He had already been on the verge of joining Manchester United over the summer, but the Old Trafford side baulked at the €10m per season wage demands.

“I had a brief spell at Manchester City and it was very positive. I like the atmosphere that surrounds football, as it’s different to France or Italy. I always said I would like to play in the Premier League.”

Rabiot was asked if that would be after his contract with Juventus expires or before?

“I don’t know. I don’t have a preferred team in England, there isn’t one that necessarily stands out to me, it’s the general league that attracts me. It suits my qualities more.”

The France international was famously something of a frustrating figure at Juventus, but seems to have finally found his niche under Max Allegri.

“I am going through a good period of my career. I too have grown and matured, so has my football. It is fundamental for my style that I am in good shape physically and that is something I worked on a lot since coming to Juve.

“There was a period when I was criticised a lot, but that didn’t knock me down. Similarly, I don’t intend to get ahead of myself now that I am receiving praise.”

The 27-year-old was asked how he has made the next step up in his career.

“I am more concentrated throughout an entire match. I also try to believe in myself more, work harder in training, it all makes me a more complete player than I was a few years ago.”

3 Comments on “Rabiot sees Juventus exit: ‘I’d like to play in Premier League’”