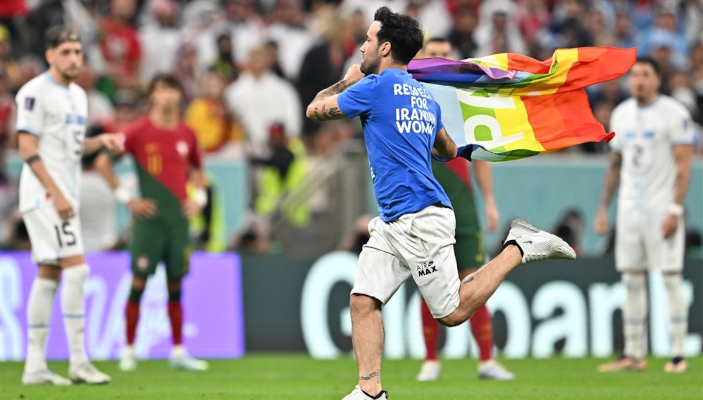 Mario Ferri, the Italian pitch invader who interrupted the Portugal-Uruguay clash with an LGBTQ+ flag, opened up about his experiences after being stopped at the World Cup.

The Italian, who is known as ‘The Falcon’, is an experienced pitch invader and campaigner, fighting for human rights across the world. At the 2014 World Cup in Brazil, Ferri ran onto the pitch wearing a shirt referencing the favela situation in the country. Recently, he has been working in Ukraine, helping people to escape the war and reach Poland.

Ferri stormed onto the pitch during the second half of Portugal’s win over Uruguay, carrying an LGBTQ+ flag and wearing a Superman shirt with ‘Save Ukraine’ on the front and ‘Respect Iranian Women’ on the back. His act drew attention from across the world and many were concerned for his safety.

Speaking to Spanish outlet OndaCero today, Ferri discussed his experience after being stopped at the World Cup.

“I spent a difficult night, not in prison but at the police station in Qatar. Infantino came here at 4am and helped me. I had never met Infantino, who last night told me ‘you again, why? Qatar is very dangerous for you’.

“I told him that the messages I wanted to send were very important to me. I like to invade and throw myself into the middle of these important matches, clearly always with good intentions and with positive messages like those of yesterday.”

Ferri has invaded pitches 12 times before, with one example being his act during a Champions League clash between Milan and Real Madrid.

2 Comments on “Pitch invader Ferri: ‘Infantino said Qatar was very dangerous for me’”