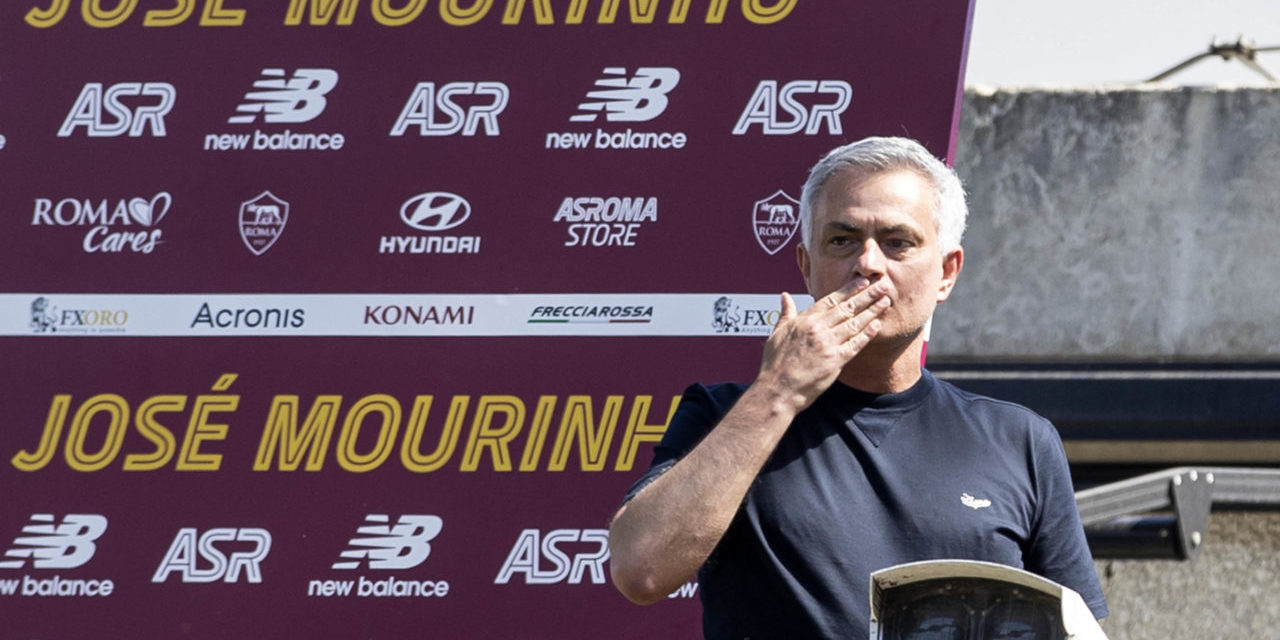 José Mourinho explains why he joined Roma: ‘I am not here for the city, because I am not on holiday.’

The Special One has signed a three-year deal with the Giallorossi and is being unveiled in a press conference today.

“I want to thank the fans for their warm welcome, it was incredible as I still haven’t done anything. I thank the club and the Friedkin family, the way I was welcomed was fantastic and I was impressed,” Mourinho said.

“Dan and Ryan Friedkin have a clear project, they want to build a future for Roma. The word ‘time’ sometimes doesn’t exist in football. This time, it exists and it’s crucial.

“Roma don’t want success today, but they want a sustainable project for the future, working with passion. That’s why I am here.

“Now it’s time to work with my staff, the city is great, but it’s not the reason why I am here because I am not on holiday.

“The symbol, the colours, have a great link with the club, sometimes you confuse the city of Rome with Roma, but we are here to work, not on holiday.

“I had to change mobile No. three times because you [journalists] always manage to have it. Jokes aside, it’s incredible [to be back]. I’ve missed Italy, but there’s a lot of work to do.

“You know I am not too nice when I work, because I need to defend the club.”

How will he change the club’s mentality?

“The first step is to know the group. I can’t change something before knowing the players. Some principles are not negotiable. Today is the first training session and I want the players to understand how we work straight away. I always want 100 per cent from everybody.

“I spent the quarantine at Trigoria, so I had a chance to speak to many people and I saw a great desire to work together, that was a great feeling.”

Has he talked to players like Gigio Donnarumma or Sergio Ramos to convince them to move to Roma?

“I’ve spoken to nobody, believe me, or not. I speak to Tiago, the owners, but not with other players.”

Is this the biggest challenge in his career?

“The next challenge is always the most important one, so yes.

“When we talk about Italian football we talk about the EURO finalists, and most of the Azzurri players play in Serie A. If the Italian league is not seen as a top league, it’s our responsibility and we have to do something more.

“I work for Roma, but, indirectly I work for Italian football too.”

What does he think about Edin Dzeko? Will he be the captain next season?

“I don’t have to tell you what I do in my club. I can’t share with you this information. The club directors will be the first ones to be informed.”

What are his plans regarding Leonardo Spinazzola and Bryan Cristante?

“We are all happy that these players are part of a national team that is doing really well and has 50 per cent chances to return here as EURO champions.

“I’ve never worked with them, but I feel they are my players. Cristante proves the national team is full of great players, but only 11 can play. Mancini can’t change this, he respects Cristante and relies on him.

“As for Spinazzola, it’s a sad situation for all of us, but he is incredible for his joy. He is a positive person, but we won’t have him for a long time, it’s tough for him and us.

“We have a young player like Riccardo Calafiori, he can be a first-team player, but we need a left-back, sorry director [Tiago Pinto].”

What has changed since he left Inter in 2010?

“I am the Roma coach, I don’t want to be anything else. There’s a lot to do here, I’ll be covering this role for 24 hours, except a few hours I need to sleep.

“If, during this time, we can give something to Italian football, that would be great. Many things can happen and I will give everything to defend my players, but I won’t be the one looking for trouble, I don’t have time for that. I have more experience now, so I am more solid emotionally, but I will always defend my club.

Despite the warm welcome from most Roma fans, some pundits had claimed Mourinho is not the same one he used to be. What’s his reply?

“I have nothing to say. In my last three clubs, I won the title at Chelsea, three cups at United, and I reached a Final at Tottenham, where we arrived sixth starting from 12th, reaching the Europa League. What’s considered a disaster for me it’s something that others have never achieved, it’s my fault.

“Roma don’t belong to me, but to Romanists, I am just one more. I don’t like to hear Mourinho’s Roma, but if you want, you can talk about Sarri’s Lazio, or Allegri’s Juventus.”

Would it be a failure to end the season without trophies?

“You always talk about titles, we talk about the project and work. It would be easy to promise a title, but the reality is different.

“We talk about the project and about improving. You talk about titles, we talk about projects. The owners don’t want an isolated success, they want to get there and stay there, which is more difficult.

“It’s easy to win and have no money to pay salaries, but we want to be sustainable and the club and I share the same view. We’ll work and we’ll reach a title.”

What’s his project for Nicolò Zaniolo?

“We need to understand and communicate. There’s a very technical team here, with great passion. Many players have left their comfort zone to come here and work with us, there is a lot of work to do.

“Zaniolo has an incredible talent, like many others in this team, we know his injury history, we need to find the best habitat for him and the others.”

What’s his tactical plan for the Giallorossi?

“We have an idea, but we must work on it. We must understand how we can put each player in the best position.

“Football has changed a lot, now it’s more difficult to decide a single system, nowadays you need to be able to change and have more options. Players have a better tactical culture now.”

Does the All or Nothing series reflect his true self?

“The cameras were there, but they were hidden. You think about them for the first week or two, but after that, not as much.

“Imagine after a game you arrive in the dressing room and you act naturally, you forget there are cameras, but please don’t give ideas to Friedkin Production,” he said with a smile on his face.”

Mourinho has been compared to Antonio Conte, so is he sorry they won’t meet in Inter vs. Roma and should Cristiano Ronaldo be worried about his return?

“There are some coaches in the clubs’ history that you should never compare to others. For this club, don’t compare Capello or Liedholm to other coaches.

“For Inter, never compare others to Herrera or me, because you just can’t do that.

“Ronaldo should not be worried about me because I am not playing at centre-back. Had I played centre-back, I’d hit him, but unfortunately, I am not good enough and I am too old to play against him.”

Where does he see Roma in three years?

End of the press conference