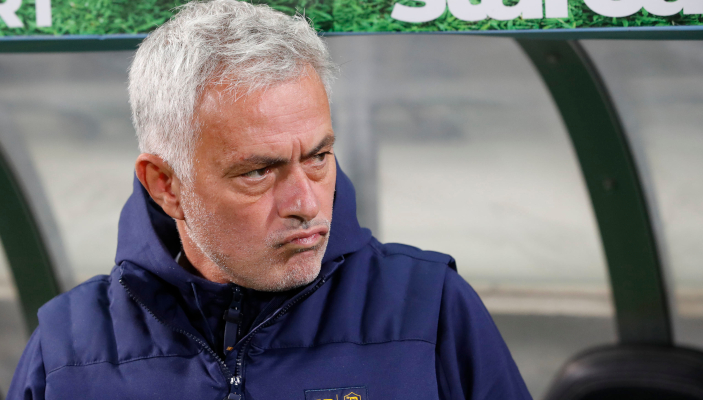 Jose Mourinho discussed Roma’s mindset on the transfer market, if he could ever coach the Japan national team and the state of his squad during this World Cup break.

The Giallorossi have headed off to Japan for a training retreat during this six-week Serie A pause, scheduling friendlies against Yokohama F. Marinos and Nagoya Grampus. A number of clubs in the Italian topflight have prepared training camps, either heading abroad or bringing the squad in for a retreat at home.

Speaking in a press conference, Mourinho first discussed if Roma are looking to sign more Premier League players in the near future.

‘We don’t have the strength to go and get players from the Premier League, but Abraham was a player who wanted to prove himself.

“Matic is 34 years old and has played at the best clubs, he came back to play with me to bring experience.”

He gave his thoughts on his Giallorossi squad.

“You have to be lucky, to have players with the right motivation and quality. Us coaches can implement things but we don’t work miracles. Everyone has everything in their own hands.”

The Portuguese coach touched on if Roma would look to sign a Japanese player.

“A Japanese player at Roma? If he’s cheap…”

Mourinho spoke about the chances of seeing him coach the Japanese national team in the future.

“In football never say never, but I don’t think the Japanese national team needs me, they have coaches of a certain level. In football it’s difficult to talk about a project, but it seems difficult to me.”

He gave his thoughts on the Giallorossi’s friendlies against Yokohama F. Marinos and Nagoya Grampus.

“The Marinos are champions, they have more quality and imagination going forward. Nagoya are organised, I expect tough matches. I’m missing players and jet-lag doesn’t help.”

“I didn’t see the match, I was in bed, the television was on but I fell asleep, I was devastated. Congratulations to Japan, but it’s not such a big surprise, they’re a good team that are growing.

“In Europe we focus on individuality. I have coached Asian players and I am lucky because I have coached the best, they have the right mentality, that’s why I think yesterday was not such a big surprise.”

Finally, Mourinho discussed the health of the injured players in his squad.

“Then the second objective is to give rest to those who have played three games a week. After Japan they will have 10 days which is important.”

One Comment on “Mourinho: ‘Not a big surprise Japan beat Germany at World Cup’”