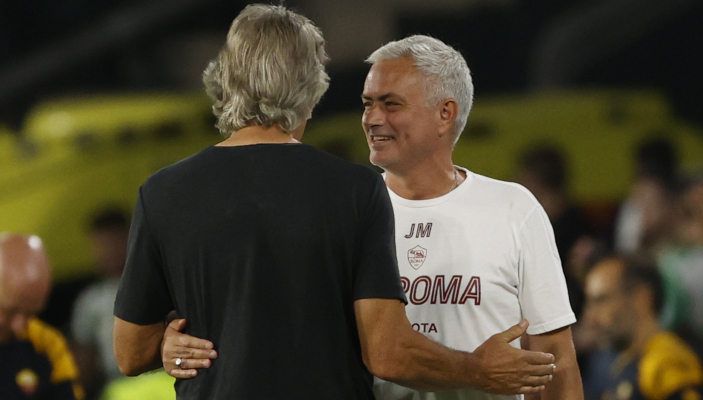 Jose Mourinho knows Roma could end up facing Barcelona in the Europa League play-offs, so mocked the competition for welcoming ‘the failed sharks of the Champions League.’

The Giallorossi are currently third in their Europa League group behind Real Betis and Ludogorets, but hope to leapfrog the Bulgarians into second place.

That would put them into the play-offs, whereas the group winners go straight through to the Round of 16.

Asked in his press conference after the 1-1 draw if Real Betis are the favourites to win the Europa League now, Mourinho couldn’t help but aim a cheeky dig at his old rivals.

“I see them as candidates, but the failed sharks of the Champions League will arrive, and they will come in hard. It will be fun,” he smirked.

Barcelona are currently third in their Champions League group behind Bayern Munich and Inter.

“We want to go through and finish second, but if we finish third, we’ll become candidates to retain the Conference League.”

Roma won the Conference League last season, the first major UEFA trophy in the history of the Capital club.