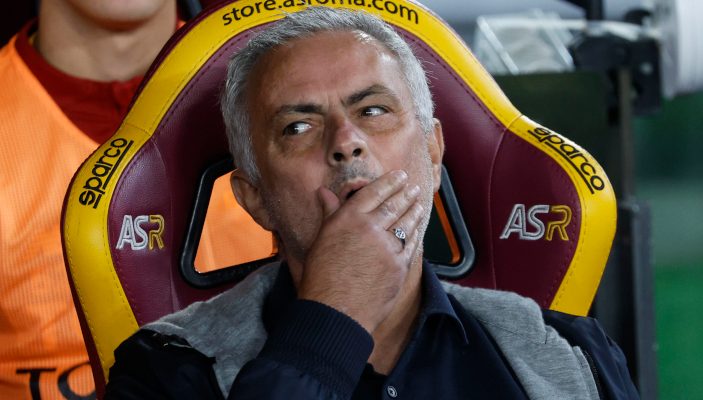 Jose Mourinho warns it is ‘unlikely’ Paulo Dybala will play for Roma again in 2022 after a freak injury, but is also very unhappy with their performance against 10-men Lecce. ‘Sometimes the players do the opposite of what I ask.’

It was far from a vintage performance, as even after the Chris Smalling header and rather harsh red card on Hjulmand, 10-man Lecce still equalised through Gabriel Strefezza.

Only Dybala’s penalty for a slight clip on Tammy Abraham’s heel gave the Giallorossi victory and it came at a price, because La Joya sustained a left thigh injury while taking that spot-kick.

“I don’t remember many games in my career with 11 against 10 where I wanted it to end as soon as possible. There was fatigue yes, physical and a little psychological too, as it’s tough playing Thursday and then Sunday,” Mourinho told DAZN.

“I watched Udinese–Atalanta today, you can see very clearly they are teams who only play one game a week. However, that is not a justification.

“We started hungry, intensive and moving the ball around quickly, then it was tougher against 10 because they clammed up yes, but also tougher because we moved the ball badly. I get the feeling it often happens that when you are tired, you make things over-complicated rather than keep it simple.

“You need to move the ball around to create the spaces, but Belotti was the only one who had any real impetus with the ball at his feet. Lecce waited for the final 10 minutes to risk everything for an equaliser.

“It’s true that we had the chances to score more, but also true that they could’ve equalised with a bit of luck. We didn’t play well today, but we won. Obviously, I’d prefer to have the points and a good performance, but for now the result will do.”

Mourinho was asked how Dybala was doing and if Roma fans will see him again in 2022, as La Joya seemed to be in tears as he sat on the bench.

“I say bad, but I think very, very bad. I am not a doctor, but in my experience, and speaking to Paulo, it’s unlikely we’ll see him this year.”

It remains to be seen how serious the injury is, considering Argentina are gearing up to start the World Cup in mid-November.

The Giallorossi have a very clear issue and that is converting more of their scoring opportunities, so how can Mourinho help his players to break that barrier?

“You can train to improve, and we do, but I think it’s more psychological. For instance, the last chance that Tammy Abraham gets wrong, he remains practically off the pitch without coming back to help the team defend an important result. That is typical of someone who is desperate to score a goal.

“I hear his comments, his negative thoughts, obviously it is worrying because we need goals to win games, but the strikers shouldn’t worry this much. I am more worried by too many touches controlling the ball, slowing it down, not finding the spaces.

“Sometimes when I watch the game, I feel maybe my Italian is horrible now, because the players do the opposite of what I ask them to do.”

The Special One went back to the pre-season complaints he had about the midfield, which all came back when Georginio Wijnaldum sustained a serious injury after just one appearance.

“When we lost Mkhitaryan and Veretout, Wijnaldum was meant to be the man to set the tempo in midfield. When we lost him too, we were missing someone performing that role.”