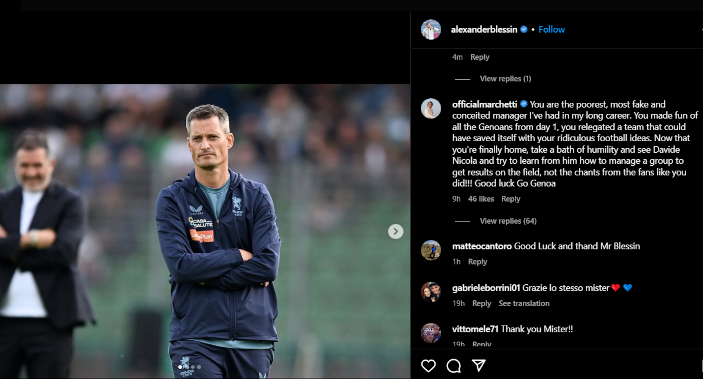 Genoa sacked coach Alexander Blessin and various messages appeared on his Instagram, including ex-goalkeeper Federico Marchetti calling him ‘the most fake and conceited manager I’ve had in my long career.’

The German was brought in from KV Oostende in January 2022 with the club already at risk of relegation and in a dire situation.

When they did go into Serie B, matters did not really improve and he was fired after a run of two points in five rounds, including a home defeat to Cittadella.

Blessin has not broken his silence yet, but his most recent post on Instagram has received comments from various fans either thanking him for trying or giving the coach a good riddance.

The most intriguing message is from former Genoa goalkeeper Marchetti, who was at Genoa from 2018 and left as a free agent over the summer.

Knowing that Blessin does not speak Italian and gives his interviews in English, Marchetti decided to write his own message in English.

“You are the poorest, most fake and conceited manager I’ve had in my long career. You made fun of all the Genoans from day 1, you relegated a team that could have saved itself with your ridiculous football ideas.

“Now that you’re finally home, take a bath of humility and see Davide Nicola and try to learn from him how to manage a group to get results on the field, not the chants from the fans like you did!!! Good luck Go Genoa.”

Most of the responses to that message were criticising Marchetti for being in no position to speak, especially as his rapport with the Genoa fans deteriorated badly.