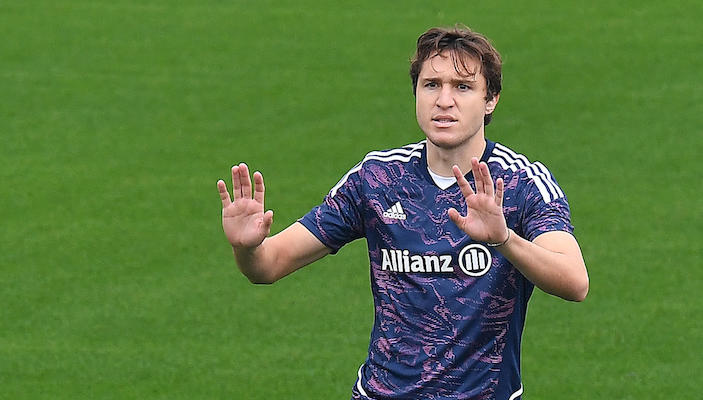 Federico Chiesa reflected on his recent cruciate ligament rupture, the difficulty of the recovery and how it feels to return to action for Juventus.

The 25-year-old Italian forward suffered the serious injury in a 4-3 win over Roma back in January, leaving him sidelined until the start of this month, when he played 16 minutes of the Champions League loss to Paris Saint-Germain. Chiesa has made two more appearances since and provided one assist, slowly working back his match fitness.

“It’s also nice to be here and get back to the routine of before. It’s been 10 endless months, in August when it seemed to be there the finish line at every training session I had knee problems.

“I had to do check-ups, I flew back to Innsbruck, the month of August was really terrible but with strength and tenacity and the people who loved me I got out of it and it took me two months to get back into shape, then coming back with the team and the call with PSG was the closing of a circle.”

He discussed how he plans to get back into shape for the Bianconeri.

“I would’ve been more happy to take part in the World Cup but I will use this break to do the training camp that I didn’t do in July, so for me it will be like starting again from the beginning and then I will try to help the team in January.

“As I came back with the team my desire was so great, the call up against PSG was so unexpected, I didn’t expect it, I told the coach I was ready and I wanted to give the team a hand.

“We didn’t show quality in the Champions League but in the league we’ve set ourselves up and we’ll see what we can do in January.”

The 25-year-old spoke about how it felt to watch Juventus’ sluggish start to the season from the sidelines.

“I strongly believe that we have a squad of fantastic guys who are willing to put themselves at the coach’s disposal and we have a great future ahead of us because we managed to pull ourselves out of a really bad period.

“We showed that we were coming out of it and the most important thing was the cohesion of the squad, together we wanted to get out of it at all costs because Juve didn’t deserve that situation and I think 3-0 is the most fair result.”

Finally, Chiesa discussed where he sees himself in Massimiliano Allegri’s 3-5-2 formation.

“I’ve always played on the wings, I’m comfortable and I played my best football out wide, then I also played second striker, today I was happy to return to that position.”

The return of Chiesa will give Allegri and the Juventus squad a huge attacking boost in the second half of the season.