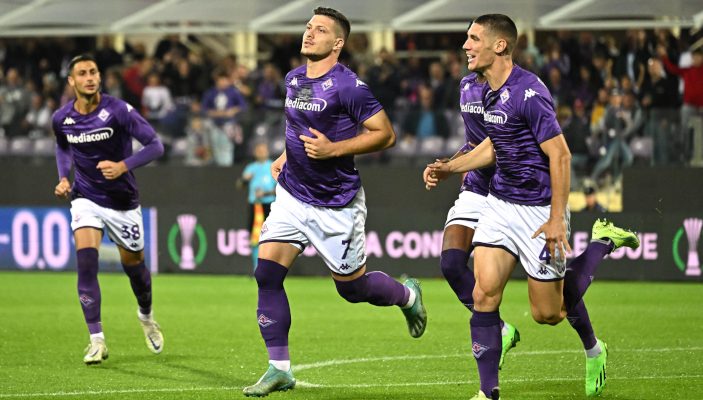 Fiorentina fans are unhappy with their striker Luka Jovic due to his controversial goal celebration during the match against Inter yesterday.

The Tuscans levelled the score thanks to a late goal from the ex-Real Madrid forward who found the net at minute 90, thinking that La Viola had rescued a point against the Nerazzurri.

However, Henrikh Mkhitaryan scored the eventual winner less than five minutes later, frustrating Fiorentina fans, who also turned to Jovic after the final whistle, despite his goal.

The Serbia international had celebrated his late strike by running under the Curva Fiesole, putting his hands behind the ears. He also made a gesture with his hand to say ‘blah blah blah’ something that most Fiorentina fans didn’t appreciate.

As highlighted by Violanews, Nikola Milenkovic and Lorenzo Venuti embraced him to avoid a reaction from ultras. However, his gestures were spotted by many on TV and at the stadium and fans on social media are now demanding more respect from a player who has scored four goals in 16 appearances across all competitions this season.

“Failing to score goals is the worst thing for a striker and it affects their confidence. Jovic is a very sensitive man, he came here wanting to prove himself to the world, had an injury and struggled, but with everyone working together, I hope these goals can be a positive boost for everyone,” explained Fiorentina coach Vincenzo Italiano.