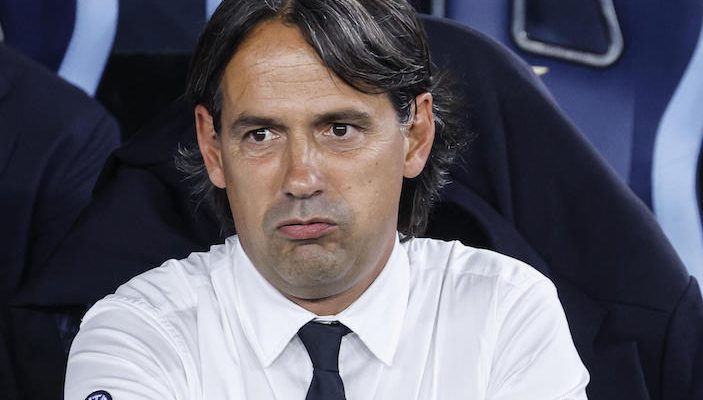 Simone Inzaghi insists Inter ‘did enough to earn a draw’ against Milan, but they were unable to make up for the ‘half-hour blackout’ at San Siro.

The Nerazzurri had taken the lead through Hakan Calhanoglu, but a pair of Rafael Leao goals and the Olivier Giroud flick turned it around.

Edin Dzeko came off the bench to get them back into it with a flick on Henrikh Mkhitaryan’s assist in off the near post, but only a fantastic Mike Maignan save prevented Hakan Calhanoglu making it 3-3.

“It started a balanced game, then we scored a fine goal, after the equaliser we had a half-hour black-out that cost us another two goals,” Inzaghi told DAZN.

“We scored two wonderful goals, but conceded three that we absolutely cannot afford, we should not concede, especially not in a derby. At the end we lost.

“Considering everything we created, we probably deserved a draw, but I am the coach and the first to be held responsible for that half-hour that left to be desired. In such an important match, we should’ve done better.”

It is the second defeat of the season after the 3-1 away to Lazio, which had some similarities, particularly in the lack of intensity and confidence.

“They were two different games. We struggled to score tonight, were up against a fantastic goalkeeper, and once again we concede goals far too easily. I am the coach, so I need to figure out how we can resolve that problem.

“In order to win the derby, you have to do more. After the substitutions we did better, but the fact is during that half-hour we conceded two goals and were unable to make up for it.”

Inter seemed to be going in a completely different gear to Milan for the first hour, but once they woke up, showed great intensity and grit, so it was not a fitness issue.

“We cannot have these blackouts against sides like Lazio and Milan, as they compromise the match. Details make the difference, we had to build our chances out from the back, whereas the goals we conceded were just too easy.

“There was that moment when we were in control and leading 1-0, but we conceded that goal when playing out from the back and it was totally against the run of play.”

Inter have now conceded eight goals in five Serie A games this season and some of their defending has been static.

“It is the same team that last season went eight rounds without conceding, so we need to look at the figures, look at today’s game and realise we struggle to score goals, but concede them too easily. We must get back to solidity, because we know that sooner or later we do score.”

Inter will now go into the Champions League and face Bayern Munich in the opening fixture.

“At this moment, it hurts to lose a derby, for our fans, for the club, as we could’ve done so much more. There is great disappointment at losing the derby.”