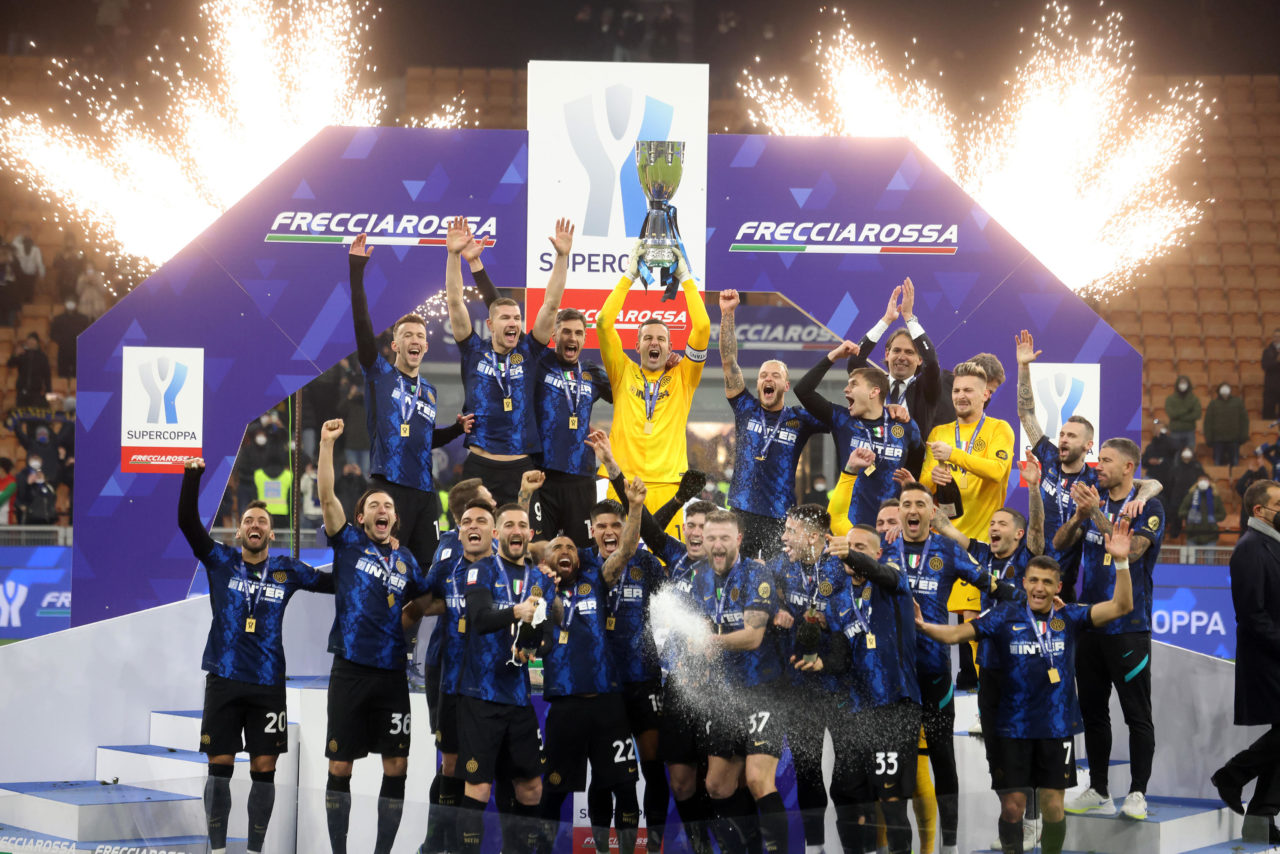 Inter won the sixth Supercoppa Italiana in their history and Richard Hall explains why it means more than just another piece of silverware for the Nerazzurri.

It was nervy and could have been emphatic, but instead, it was a late and dramatic win. A mistake in the Juventus defence saw Alexis Sanchez nip in and win the Supercoppa in the last seconds of extra time. It released a volcanic eruption in San Siro as the win in the competition means more to the club than being just another trophy.

It was a symbolic win, signalling a change of the guard. It confirmed that there is a new dominant force in Italian football. It was a direct message to Juventus.

One may argue that it had already been sent when Antonio Conte brought home the Scudetto last year. However, with Juventus holding a CV that outshines the rest of Serie A, there was always the threat that they would return to what has been their rightful place in the league over the last decade.

The return of Max Allegri also had made Inter nervous, but as the season has developed, the efforts of Beppe Marotta, Simone Inzaghi and the players have seen Inter deservedly sit on top of Serie A.

There had been questions of whether the Nerazzurri could repeat the efforts of last year without Romelu Lukaku, Achraf Hakimi and Antonio Conte, but they have arguably become a better team without them.

Edin Dzeko has replaced the Belgian forward for no money whatsoever, whilst Denzel Dumfries recent form has helped fans forget Hakimi as his speed and directness mirror the Moroccan’s. More than one player in the squad has also spoken about the fact that Inzaghi has given them more freedom, allowing them to perform at an even higher level.

The team has not lost the discipline they had under Conte, which showed from the off against Juventus. In short, The Old Lady was outthought and outfought and the final statistics showed this. Inter had an incredible 63% of the possession, completed 813 passes to the opposition’s 482 and had 23 shots compared to the Bianconeri’s eight. If one were to criticise the Nerazzurri, they were not clinical enough as they could have put the game to bed in the first half. Juventus battled hard and, after taking the lead, only fell level due to a penalty. Inter were nervous at points, especially when Federico Bernardeschi kept being allowed space to run.

In the end, as penalties loomed, the Juventus reserves on bench were screaming at the defence to foul an Inter player or put the ball out of play so they could bring on Leonardo Bonucci to take a penalty in the shoot-out. The shouts confused the Bianconeri defence and perhaps contributed to Alex Sandro’s horrendous error that allowed Alexis to sneak in, grab the winner and send the black and blue into ecstasy.

The frustration for Juventus was evident. They missed a chance to win a trophy for the 11th year in a row. They can still lift a piece of silverware this season, but their main target in Serie A appears to be a mere top-four finish. Their domestic domination is over and, honestly, they don’t seem in shape to restore it anytime soon. The Supercoppa showdown once again proved it.

The win for Inter was a flag in the ground to say they are moving ahead of Juventus and even the most ardent of Bianconeri faithful would grudgingly admit it. The Nerazzurri have the stronger squad, they have an identity, and ironically, their biggest asset could be Beppe Marotta.

The Inter director oversaw Juventus’ success in the past and now he wants to bring that winning mentality to San Siro. In a way, he has already done it. He said pressure is an ‘ordinary’ characteristic for a side that aims to win trophies. Arguably there isn’t any other director in Serie A who can handle pressure as he does. Inter’s situation seemed catastrophic in the summer. Nevertheless, less than six months later, they once again look the rest of Italy from the top spot.

This Supercoppa victory was so important because it was against Juventus and whilst the score-line was tight, all the other factors of the game showed the gap beginning to widen between them.

This was a game that said to all of Serie A: come and catch us and the mood around the camp certainly represents these feelings. The Nerazzurri have a tough January but have already navigated Lazio and Juventus. Inzaghi has his first trophy as an Inter coach and his team is hungry for more. Just look at how they fought to get the ball back from Juventus high up the field. Call it the changing of the guard or a statement win but what is certain is that Inter are the team to beat to win the Scudetto.