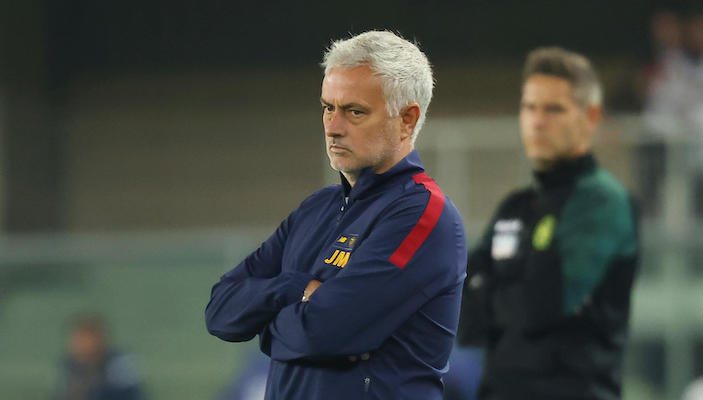 José Mourinho believes he is ‘allowed to cry a little’ as most players Roma signed in the summer are injured and says ‘he would have been killed’ had he played the Rome derby as Lazio did.

The Giallorossi have lost Lorenzo Pellegrini for their away match against Sassuolo tomorrow. The Italy international has joined Paulo Dybala, Leonardo Spinazzola, Gini Wijnaldum and Ebrima Darboe on the treatment table.

“Pellegrini has been playing too much and is struggling. He is fragile and doesn’t end many games being 100% fit,” Mourinho said at a press conference, as quoted by TMW.

“We usually don’t lose when we score, we have as many points as last season, which means that if we get results against Sassuolo and Torino, we could have two, four or six points more than last season after 15 matches.

“We lost three starters in midfield, Mkhitaryan, Sergio Oliveira and Veretout. Wijnaldum hasn’t played yet, then we have Camara and Matic. He didn’t join the team to play with Cristante, but they have often played together.

“Unfortunately, we faced unexpected problems this last season. When Spinazzola got injured at the Euros, we had to take a direction we didn’t like. I am crying a lot, but I don’t like to do so, I like to say that we have had these problems that opened the door to Volpato and Zalewski. Bove is improving and Tahirovic will play soon. Two games are remaining before the break, let’s see how many points we can earn.”

The Giallorossi want to react after Sunday’s 1-0 loss in the Rome Derby. Felipe Anderson scored the winner at the Stadio Olimpico, making the most of an error of Roger Ibanez, who Mourinho refused to blame.

“I expect the same reaction as when we lose. We know that when we lost a player, we struggle, but in the end, we always produce something,” said Mourinho.

“Tomorrow it will be a complicated game, I expect the maximum effort to return smiling, which we haven’t done in the last two days.

“Ibanez? Respect is due to somebody who has always given his best since day one. When we played in Sevilla I saw him in the morning and thought it was impossible for him to play, but he made it. To me, he is untouchable.”

Roma have collected more points away than at home, losing three games against Atalanta, Napoli and Lazio.

“Had we played as Lazio did, they would have killed me,” claimed Mourinho.

“Napoli played a different game. If you look at our line-up, you’d see that we have the same players as last season with Camara in place of Mkhitaryan.

“This means that all the players who joined us in the summer transfer window with edition and sacrifice are not playing. I can cry a little as well, Dybala didn’t play any big game. He scored in the game we won against Inter and delivered an assist in the draw against Juventus.”

Cristian Volpato has rejected a call-up to the Australia national team for Qatar 2022, waiting for a call from Italy CT Roberto Mancini and Mourinho seems to back his decision.

“It’s a personal choice, it doesn’t concern the club, this is the beginning of his career and he wants to grow up at Roma, it’s a growth process and he must focus on his future. Somebody wants to accelerate a process which should not be accelerated.”