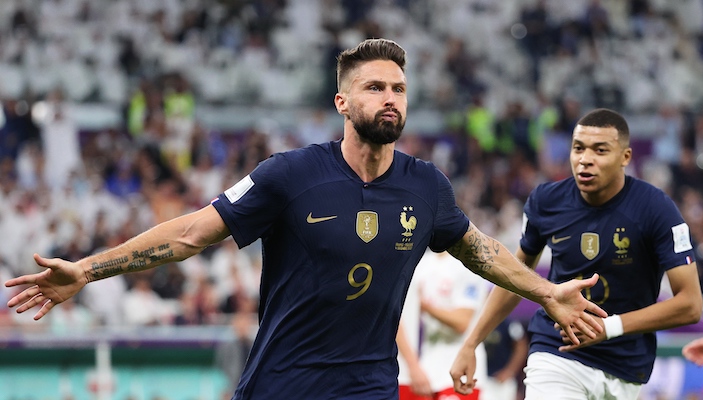 Milan star Olivier Giroud believes he is similar to England and Tottenham striker Harry Kane and praises his compatriot Kylian Mbappé: ‘He is scary…’

Giroud became France’s all-time leading scorer earlier this week, scoring a goal in a 3-1 win over Poland in the World Cup Round of 16.

“The record reminds me of all the years I spent with the national team, the most important thing is to be an example for young players, the team still needs me,” the veteran striker said at a press conference today, as quoted by Gazzetta.

PSG superstar Mbappé got his name on the scoresheet – twice – against Poland: “It’s nice to play with him, he is one of the best players I’ve played with. He’s scary because he can still improve, he is the best striker I’ve played with,” said Giroud.

Does the Milan striker think he is the best centre-forward in Qatar?

“I immediately think of Ibra who said before the World Cup I was the best No.9 in the competition. I don’t know who he is, but surely Kylian is the best attacking winger.”

Giroud joined Milan from Chelsea in the summer of 2021 and contributed to the Rossoneri’s first Serie A title in 11 years last season.

“When I joined Milan, I was disappointed to leave the Premier League, but I had to find a new challenge,” the Diavoli star admitted.

“It is a great opportunity to play for Milan and I wanted to do things well. I knew I had more years in my career. I am satisfied with the title last season, but I want to do even more for this team.”

France will meet Kane’s England in the quarter-finals on Saturday.

“I spoke about him [Kane] with [Hugo] Lloris,” admitted Giroud.

“We are similar in terms of profile and physical strength. Kane scores goals and is involved in England’s play, they’ve had a good tournament and it will be a nice game.”

Giroud has scored nine goals in 19 appearances with Milan so far this season, adding three in three games with France at Qatar 2022.

His contract at San Siro expires in June, but he is expected to sign a contract extension with the defending Serie A champions until 2024 in the coming months.